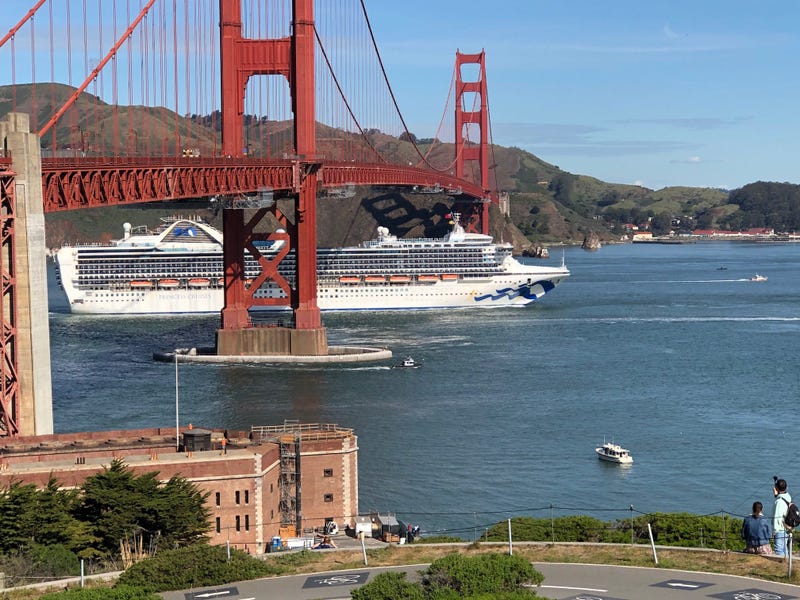 The passengers were part of the February voyage to Hawaii that was interrupted when passengers from an earlier trip to Mexico, who had already disembarked, tested positive for the virus.

The lawsuit claims the company knew that the ship was infected with coronavirus and didn't do enough to protect the passengers.

The suit, which was filed in federal court in San Francisco Wednesday, was filed by passengers from San Francisco, San Mateo County and Stanislaus County and is one of several lawsuits tied to the outbreak. The other suits were filed in Los Angeles.

The ship sailed from San Francisco to Hawaii on Feb. 21, began returning on Feb. 29, and was stalled off the California coast for several days before being allowed to dock at the Port of Oakland on March 9.

One of the plaintiffs, a resident of San Mateo County, became infected with the virus and was treated in an intensive care unit, according to the lawsuit. The others were "traumatized by the fear of developing COVID-19" while quarantined aboard the Grand Princess and then at Travis Air Force Base.

The lawsuit seeks financial awards for lost earnings, medical expenses and emotional distress and seeks to be certified as a class action on behalf of all of the more than 2,000 passengers on the Hawaii trip.

Princess Cruise Lines said in a statement, "We do not comment on any pending litigation... Princess Cruises has been sensitive to the difficulties the COVID-19 outbreak has caused to our guests and crew. Our response throughout this process has focused on the wellbeing of our guests and crew within the parameters dictated to us by the government agencies involved and the evolving medical understanding of this new illness."

The ship left the Bay Area Wednesday night after making a stop in San Francisco for supplies. It is now headed to Los Angeles where it is expected to dock in a couple of days.