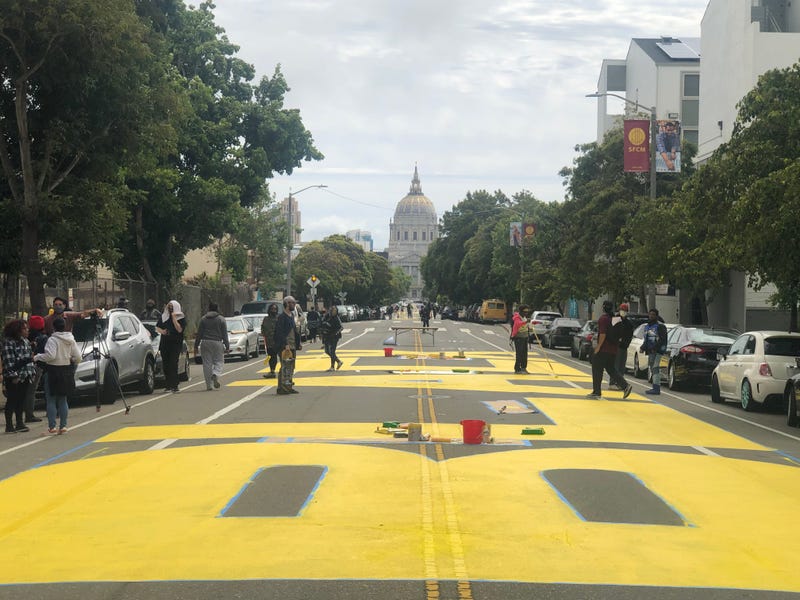 A “Black Lives Matter” art mural was painted on the streets of San Francisco’s Western Addition neighborhood Friday on a street that leads to City Hall.

“After everyone goes home and the protests subside, we want a constant reminder to the city and to everyone that black lives do matter,” said Tyra Fennel, a community organizer and founder of Imprint City, a nonprofit that uses performance and visual art to bring traffic and vitality to communities. “Black lives still matter and until the police system is replaced with a system of justice we want to be remembered, we want there to be a constant reminder and that’s what this is.”

Similar installations have gone up in Oakland, Washington D.C. and Seattle. The mural spans three blocks of Fulton Street between Webster and Octavia streets.

“I know what it is to be black, and black in San Francisco,” said Charity Morrison, a longtime San Francisco resident who painted letters with a roller. “I feel like it is very important for us people of color to be painting “Black Lives Matter” because sometimes I feel like people don’t see that our lives matter just as much as the next.”

Morrison says it is a way for the city’s shrinking black community to make their presence known. “Being that it has been gentrified, there’s not a lot of us out here anymore, so we have to make our mark and make our stamp.

As for people who may want to respond with “all lives matter,” Morrison said, “they have been putting us against each other; black lives versus all lives, and black lives versus blue lives but we are one people. We are all a part of the human race… and you cannot include all without including black.”

For Dayonara Thompson, working on the mural was a way to find positivity in a time of tragedy.

“We are out here not just to put a sign out but also just keep up that good energy. There has been a lot of negativity in the media, on the news. It’s kind of triggering some with PTSD, for a lot of folks who used to come out,” Thompson said. “So (this gives us an opportunity) to get into our artistic side, meditate through art and just kind of do something beautiful for our community.”