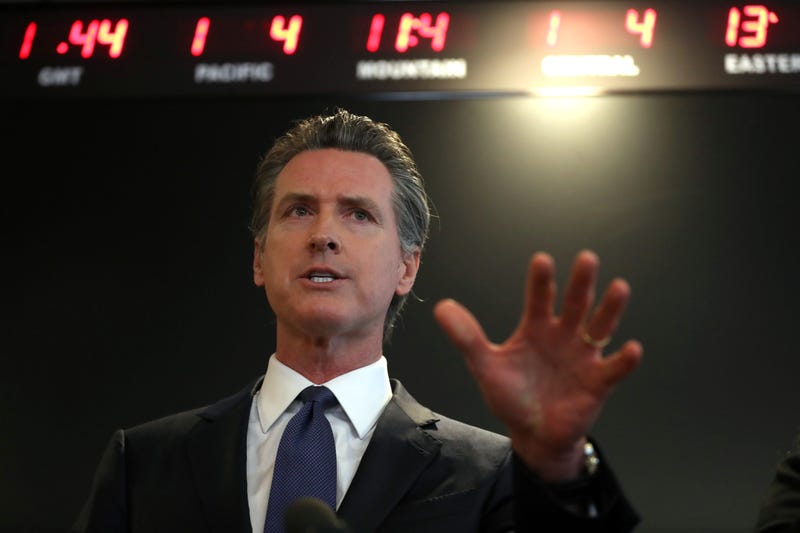 Photo credit Justin Sullivan/Getty Images
By All News KCBS Radio KCBS All News 106.9FM and 740AM

The number of confirmed coronavirus cases in California jumped from Wednesday by 21, including an unspecified number of passengers from the Grand Princess cruise ship

Gov. Gavin Newsom announced at a Thursday news conference that there are now 198 confirmed cases in the state. Four patients have died.

Newsom issued a new executive order Thursday, waiving a one-week waiting period for unemployment and disability benefits for people who are out of work as a result of the virus. The order also allows local and state legislative bodies to hold meetings electronically and delays the state tax filing deadline by 60 days for any individuals or businesses who are unable to file on time.

The announcement came one day after Newsom directed cities, counties and private organizations to cancel or postpone any non-essential events with more than 250 people through the end of March.

“We will extend it as necessary and it’s likely it will be extended,” Newsom said Thursday. “We want to give people a sense of what to expect.”

However, Newsom says after meeting with representatives from Disney, tribal nations and other industries that casinos, theaters and large parks such as Disneyland will stay open for now despite his directive.

“They raised enough legitimate concerns and questions in the short run that we thought it appropriate to exclude them from this general order today and advance those conversations with earnest later this afternoon, and hopefully have some clarity and guidelines in the very immediate future.”

Newsom said there are no plans for widespread school closures but state officials continue to provide guidelines for local districts on common sense measures to reduce large school gatherings such as assemblies.

Meanwhile state officials hope all remaining passengers will disembark from the Grand Princess cruise ship by the end of Thursday. The ship has been docked at the Port of Oakland since Monday and 1,963 people have so far disembarked out of the 3,500 people on board. The vast majority of the 1,100 crew members will remain on the ship for a 14-day quarantine.

There have been 21 people on board the ship who tested positive for COVID-19 in the first round of testing and Newsom confirmed Thursday that some more people have tested positive, but could not specify how many.

Newsom stressed that while people are still being transported to quarantine sites, everyone removed from the ship will be tested for the virus once they are settled.

That could put a significant dent in the state’s testing capacity. The state currently has 8,227 testing kids available but many of them are incomplete.

“This is imperative that the federal government and labs across the United States, not just the state of California, get the benefit of all the ingredients that are components of the test,” said Newsom. “I am surprised this is not more of the national conversation. We need to focus in on these tests.”

Newsom says state officials continue to expand the number of labs within the state that can conduct tests for the virus and he hopes to significantly increase California’s testing capability by the end of March.

Newsom is likely to hold another news conference on Friday with more developments.

“None of this surprises us and I hope it doesn’t surprise you,” he said. “This is where we need to go next and to make sure we fully implement those procedures and protocols to slow down the spread, to get through a peak and to get through the next few months so we don’t overwhelm our healthcare delivery system and we can meet this moment, protect people and do our best to address not just the health, but public safety and economic consequences of this moment.”