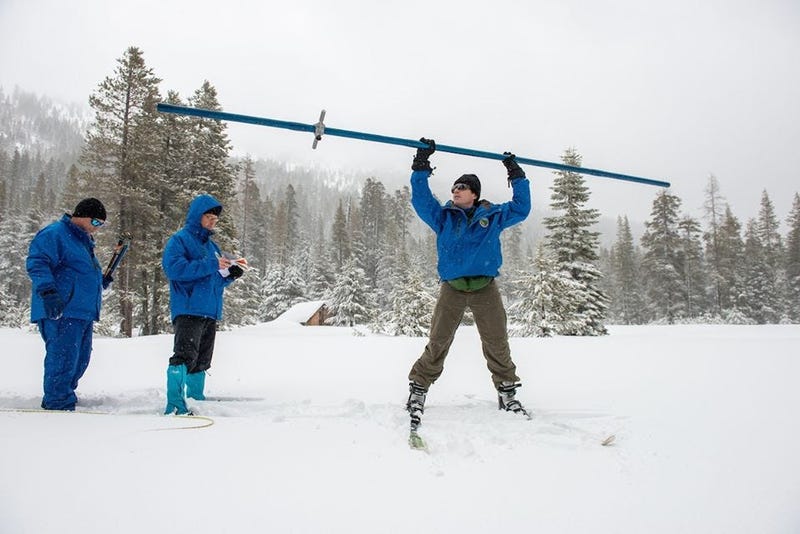 (KCBS Radio) — No need to panic yet, even though the statewide snowpack measures below average.

Water watchers are saying although the snow supplies a key portion of California's drinking water, there's no need to worry that the level is at 72% of the historic average for the start of February.

That's low, but not as low as other dry winters, including the extended drought of recent years.

The impact of last year's stormy weather patterns is an example of just how dramatically the picture can change in a short time, according to Sean de Guzman, the chief of snow surveys for the Department of Water Resources.

"It just shows how unpredictable snow and precipitation are here in California, and how just a few atmospheric rivers can really drastically change a water year like the one we're having now," he told reporters.

Aaron Baker, a civil engineer with the Santa Clara Valley Water District, concurred. With nearly two months left in the winter, Baker aid there is still a significant amount of time for storms to bolster the snowpack and reservoir levels.

He told KPIX-5 groundwater supplies in the South Bay are strong, so the reduced snow pack isn't of critical concern at this point.

Baker did point out though that the county's 10 reservoirs combined are at about two thirds of where they normally are at this time of year. Lexington Reservoir, near Los Gatos, is just half full.

The good news is that people are still in water conservation mode after having lived through our lengthy drought.

"We have been continuing making conservation a way of life, right? We actually haven't gone back up to our pre-drought levels of water usage," Baker said.