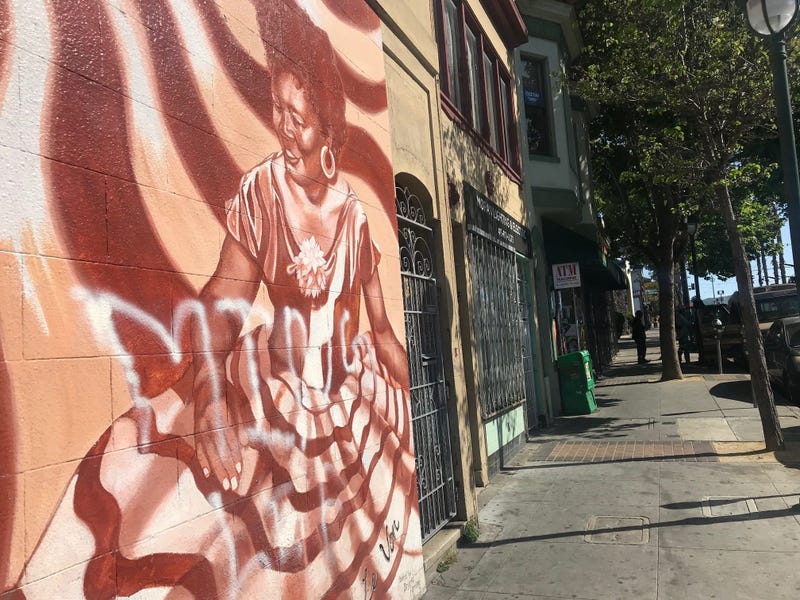 In our new special series “Crisis and Community," KCBS Radio is highlighting stories of solidarity in San Francisco's Bayview District during this pandemic.
Today in part one, reporter Melissa Culross tells us that a deep sense of neighborhood pride is energizing local efforts to confront the crisis.

In one of San Francisco’s most vulnerable neighborhoods, community organizing is at the heart of the response to the COVID-19 pandemic.

"More than living on Valencia Street or in Oakland or any of the places that I’ve lived here in the Bay Area, I feel like people really get out of their homes and they talk to each other here in the Bayview," artist Nate Watson said, who first moved to San Francisco in 2004 and has lived in many different parts of the city.  "They get to know each other, they really help each other out. People know each other well enough to understand what everybody needs."

The neighborhood is one of the city’s most diverse with the highest percentage of black residents, and significant Latinx and Asian populations.

Watson says perhaps unlike other parts of the city, all these varying groups have come together to create community.

"You have a lot of folks moving in who are from tech. You’ve got a lot of people who are fourth and fifth generation San Franciscans whose families have lived in the Bayview forever. And so this coming together of people from different economies, basically, requires a real effort to get everyone on the same page and to really create a neighborhood."

But the COVID-19 pandemic has hit people of color hard across the county and in San Francisco. According to data released last month the 94124 zip code, which includes Bay View, has one of the city’s highest infection rates.

Many advocates believe social challenges in the neighborhood are adding to the crisis.

"I think this is going to be the toughest district to tackle economic recovery," Joi Jackson-Morgan, executive director of the Third Street Youth Center and Clinic, said. The neighborhood’s medium income is about half of the city’s median income. "Now add corona to that and the lack of opportunity, this is going to reverberate for generations."

But the neighborhood is also coming together during this crisis says Yvonne Hines, who has lived there for 30 years.

"Bayview residents are resilient. In spite of what everyone thinks about what’s going on over here, we’re resilient...we’re a community that is like a phoenix, we’re on the rise here."

Jackson-Morgan says non-profits and churches have risen to the challenge, working to get food and personal protective equipment to more vulnerable residents.

In this series we’ll explore the ways Bayview residents are specifically impacted by the crisis, as well as how they are caring for each other. In part two, reporter Keith Menconi will profile volunteers checking up on vulnerable residents every single day to make sure no one is overlooked.