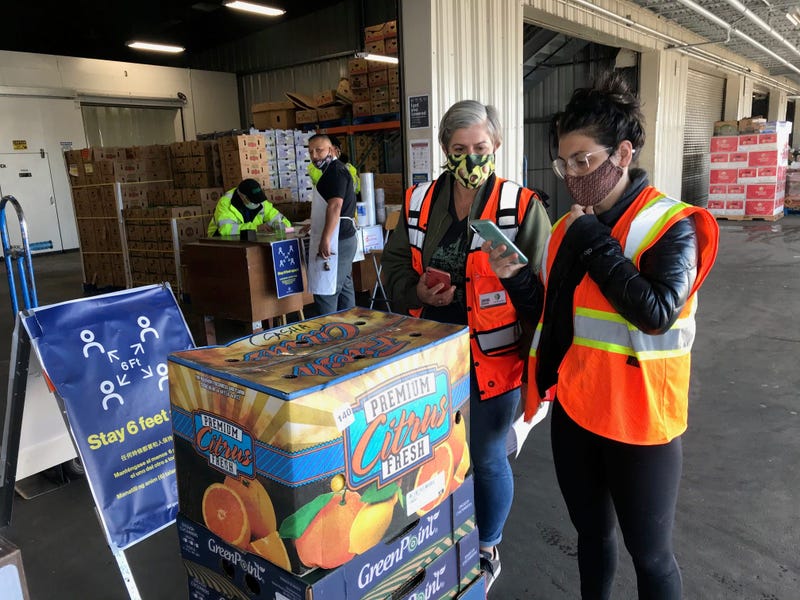 May 13, 2020 05/13/2020 5:53 pm
In our new special series “Crisis and Community," KCBS Radio is highlighting stories of solidarity in San Francisco's Bayview District during this pandemic.
In part one, Melissa Culross reported on the deep sense of neighborhood pride. In part two, Keith Menconi looked at the community groups stepping up to meet the needs of their neighbors. Today in part three, Keith examines the focus on nutritious food as medicine for the community.

Since the pandemic began, community groups in the Bayview have been ramping up the effort to get food out to those in need.

One hub tying a lot of that work together is the San Francisco Wholesale Produce Market, which takes on the important role of connecting those community groups to the people who actually have the food. When the market winds down for the day, that is when Janna Cordeiro, the market’s program manager, makes the rounds from vendor to vendor to see who has food to donate.

On a recent day she rounded up donations with a staffer at Bayview Senior Services, which is now providing 800 meals a day to residents in need.

While this program been around for a while, it is now taking on new significance.

“It’s like us trying to heal ourselves,” says Joi Jackson-Morgan who directs the Third Street Youth Center and Clinic in Bayview. “This is using food as medicine for this population… when folks aren’t receiving the proper nutrients it makes them more susceptible to illness.”

And that is a big problem in the Bayview where supermarkets are few and far between, and the rates of diabetes and obesity are unusually high.

“We came into COVID disadvantaged due to us being in a food desert,” says Jackson-Morgan. “So of course we need to fortify it, right? Of course we need to think creatively and innovatively to make sure that we are now getting food in.”

The lack of nutritious food is a kind of pre-existing condition for the community; one that people on the SF Market floor and the non-profits it supports are working overtime to treat.

Crisis and Community: Local Groups Race To Support Their Neighbors