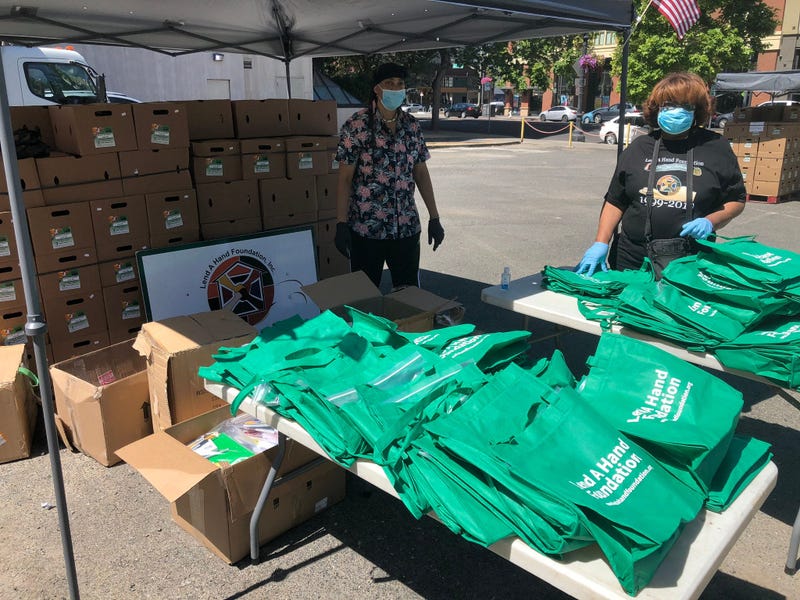 Oakland Unified School District is taking a new approach to getting much needed food to families during the pandemic by hosting pop-up distribution sites over the summer.

The parking lot at 23rd Street and Broadway became a temporary food distribution site where volunteers passed out boxes of fresh fruit and bags of school supplies, even though school is currently a bit up in the air.

David Eisenberg works with the district, which has already passed out over a million and half bags of food during shelter in place orders.

“Even if it doesn’t open up for the short time, people are going to need notebooks and pens and paper and things like that,” Eisenberg said.

Oakland families...need food or school supplies? Stop by 23rd and Broadway where Volunteers are passing out boxes of fresh fruit and bags of pens, paper and crayons. One of 2-dozen “pop up” food distribution events OUSD will be holding this summer. https://t.co/f8dnzQ9w6n pic.twitter.com/FovpHxfUmn

Dee Johnson is with Lend a Hand, and she told KCBS Radio that in her 23 years as Executive Director, she's never seen hunger as bad as it is right now.

“You can’t give someone a bag of food today and expect them to be able to eat tomorrow,” Johnson said. “So it has to be a continuing thing until we get through this crisis.”

That's one of the reasons Oakland Unified is hosting food distributions in areas away from school sites, said Eisenberg.

“By doing a pop event, or doing an event where we’re working with another organization, we can reach other people, as well,” he said.

Unhoused Oakland resident Dewyainer Thompson showed up to the pop-up and said everybody needs food.

The district plans to host at least two dozen more of these events over the course of the summer.