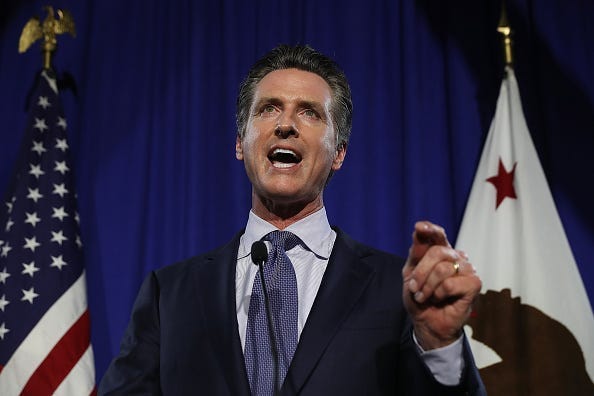 Gov. Gavin Newsom laid out his revised May budget Thursday afternoon in a marked difference from his last budget presentation.

Before the coronavirus pandemic hit, the state had a $21.5 billion surplus and had saved $16.1 billion in a rainy day fund.

"Just like that, in the blink of an eye," the governor said of the change in the state's financial situation.

Gov. Newsom is now anticipating a $54.3 billion deficit in the budget for the coming fiscal year and a 22.3% drop in the state’s revenue.

While Gov. Newsom said the state is better prepared to face this crisis than previous economic crises, he expects the situation to get worse before it gets better. The governor predicts the state’s unemployment rate will peak at 24.5%, but in the worst case scenario jobless claims could exceed 30%.

The governor laid out a new budget proposal with $203.5 billion in overall spending that includes canceling billions in program extensions, drawing from the state’s reserve, temporarily limiting tax credits and borrowing from special funds.

This budget includes a $19 billion cut to K-12 schools, but "we are not just going to roll over and accept $19B in cuts," the governor said. Instead, he plans to take $4.4 billion from the CARES Act out of the general fund to spend on education and use $2.3 billion that was supposed to pay down unfunded pension liability for CalPERS and CalSTRS to pay for teacher pensions. Money will be moved from other parts of the budget to prevent schools from taking a hit.

Another strategy to save money is a proposed 10% pay cut to state employees, including Gov. Newsom himself and his own staff.

An agreement will have to be reached workers’ unions. Newsom also proposed more telework by state employees to reduce expenses.

The governor plans to use the state’s rainy day fund over the next three fiscal years to help keep the state afloat, with nearly half to be spent in ’20-’21.

Here's the breakdown of how @GavinNewsom proposes to close $54.3B #CABudget deficit & use federal funds to mitigate cuts to schools. He's counting heavily on Congress & Trump to come to Calif's rescue. Listen live to @KCBSRadio this PM for much more, including #StateOfCA at 3:30p pic.twitter.com/hbXtypQskN

"We will get through this," Gov. Newsom said. "We are not in a permanent state, we are in a state of constant reimagination."

The governor’s new proposed budget relies on federal funds that have not been delivered but does not account for the possibility that the White House will allocate more funds in the future. At multiple points in his presentation he appealed to the President and the federal government to step in and provide assistance so that some of these measures could be avoided.

"Federal government, we need you," Gov. Newsom pleaded. "These are cuts that can be triggered and eliminated with the stroke of a pen."

The governor believes the cuts can be avoided if Congress passes and President Trump approves the latest coronavirus relief bill presented by House Speaker Nancy Pelosi, although that is unlikely.