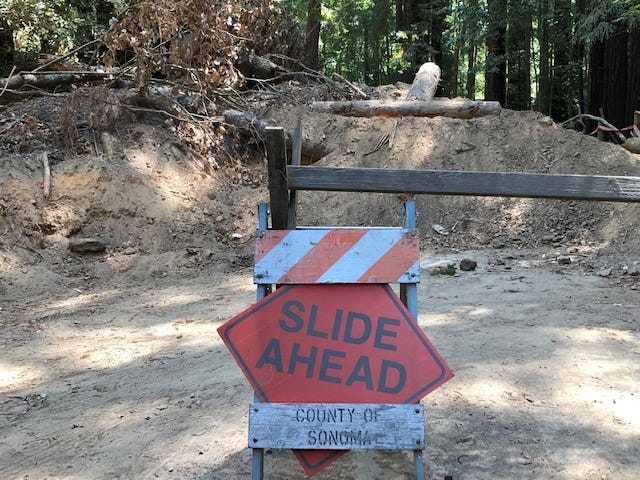 Photo credit Holly Quan/KCBS
By Holly Quan KCBS All News 106.9FM and 740AM

"Bohemian Highway has been closed since the storms because of a huge mudslide down here. Now look at this - someone just pulled over and set up alongside the highway and is living in it! All the structures are illegal and substandard, where's all the septic going? They're right on Dutch Bill Creek, where's everything going?"

Local leaders are still waiting for federal funding to begin repairs. "It is an incredibly slow and frustrating process,” said Sonoma County Supervisor Lynda Hopkins, who represents Guerneville. Officials have met twice with FEMA officials to ask for approval for cleanup projects.

It is the slowest federal response after a flood that Chief Baxman can remember in his nearly 50 years as a firefighter in the area.

"I'll be honest; I think the federal government is threadbare right now,” said Hopkins. “I think they're dealing with a lot of disasters. It’s not just us, it’s disasters all around the State of California and it’s either fires or floods.” And Sonoma County alone has seen both.

"Dollars tend to follow the greatest population and we don't have a lot of year-round residents out here. 13,000 is a drop in a bucket compared to our major cities in this area,” said Hopkins. “So I am constantly, as a rural representative, fighting for dollars, fighting for funding, fighting for resources to be pulled off of the 101 corridor. And I often feel like I'm losing that battle".