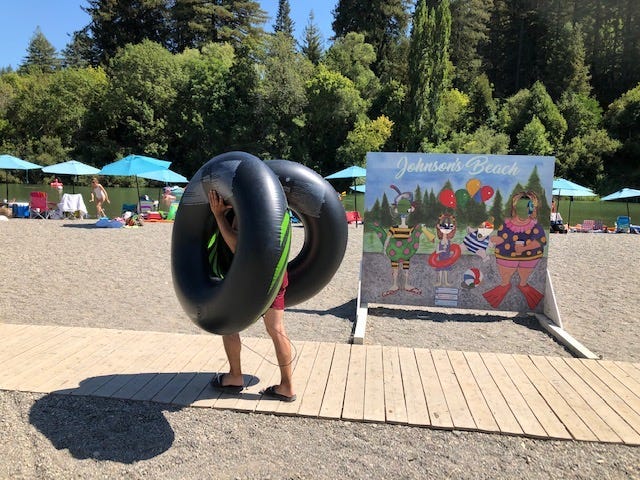 Photo credit Holly Quan/KCBS
By Holly Quan KCBS All News 106.9FM and 740AM

"For a lot of us, that was a rough beginning,” said chef Crista Luedtke. She signed the lease on her new German restaurant Brot just before the flood. The rising waters spared Brot and a few other businesses along Main Street, but they have still felt the impact from the slow return of visitors.

“We're a seasonal town so we've got basically from May to September to make our money," said Luedtke, who also owns boon hotel + spa, boon eat + drink and El Barrio. “It’s been a little bit of a challenge and I'm someone who's been here for 10 years. So I've got an established clientele and even for me, my numbers are really tight.”

Luedtke’s restaurants and hotel are busy now, along with many of the businesses that have managed to reopen. The historic R3 Hotel, one of Guerneville’s biggest employers, missed most of the summer season after it was hit hard by the flood.

"There are some that are still really struggling, that have had trouble dealing with their landlords and the insurance,” said Luedtke. “As a business owner you don't have the flood insurance, the owner of the building does. And how quickly they respond is up to them, and were they properly covered? There are still quite a few hotels that are not yet open. I just hope we have a strong end of summer and into harvest and fall so we can keep people thriving up here.”

And Abbot has found a silver lining in the devastating flood. “We hate the flood but nature - the campground itself, the trees grew in amazing and we were able to take campers right away," Abbot said.

He’s confident that even if the flood changes the town, they will find a path forward. "Guerneville’s always had this ebb and flow," he said. "It’s not the first time the town has been through this. If you study the history of Guerneville, it’s always reinvented itself every 10 or 15 years."