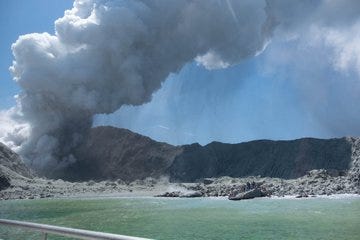 Photo credit Michael Schade
By Holly Quan KCBS All News 106.9FM and 740AM

The White Island volcano in New Zealand, which is as one of the island nation’s popular tourist spots, erupted Monday, leaving at least five people dead and others missing.

One visitor from the Bay Area escaped from the eruption while tweeting front-and-center images of the chaos.

Michael Schade, an engineering manager in San Francisco who is traveling in New Zealand with his family, said in a string of tweets that his tour group narrowly avoided disaster less than 30 minutes before White Island erupted, blanketing the surrounding area with gray ash.

My god, White Island volcano in New Zealand erupted today for first time since 2001. My family and I had gotten off it 20 minutes before, were waiting at our boat about to leave when we saw it. Boat ride home tending to people our boat rescued was indescribable. #whiteisland pic.twitter.com/QJwWi12Tvt

Some of the videos Schade shot from his departing rescue boat shows the destruction brought about by the eruption, as well as the resulting plume of smoke.

Those are some of the people put boat picked up. Praying for them and their recovery. Woman my mom tended to was in critical condition but seemed strong by the end.The helicopters on the island looked destroyed: pic.twitter.com/jds5QBD1yg

While Schade and his family seem to have made it to safety, there others on the island were killed and injured or believed to be missing.

There were five confirmed deaths, according to New Zealand police, with at least a dozen injured.

Among those injured in the eruption was an American couple on their honeymoon. Reports said the two were badly burned during an excursion onto White Island from a cruise ship.

At least 10 people are missing, but a statement by the New Zealand police issued this morning said that they believe chances of finding anyone still alive on the island are zero.

“Police believe that anyone who could have been taken from the island alive was rescued at the time of the evacuation. Based on the information we have, we do not believe there are any survivors on the island,” the statement said. “Police is working urgently to confirm the exact number of those who have died, further to the five confirmed deceased already.”

The last time the White Island volcano erupted was in 2001; the last fatality caused by the volcano was in 1912, when an eruption killed between 10 and 20 people.