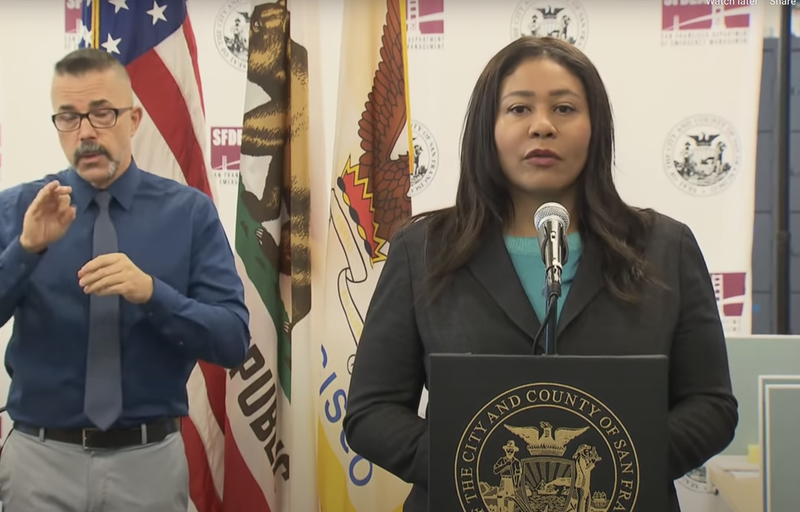 Photo credit City of San Francisco Youtube
By Bob Butler KCBS All News 106.9FM and 740AM

San Francisco Mayor London Breed has implemented a curfew for the for the foreseeable future due to the protests over the death of George Floyd in Minneapolis.

The new restrictions will impact the reopening of businesses in the city after being closed or operating at limited capacity due to the coronavirus pandemic.

Breed said that while it’s common for protests in San Francisco to start peacefully, fires are set, cars are damaged and stores are looted after the sun goes down.

“That is really not something we could tolerate… and in watching the videos, I was extremely upset because unfortunately, some of the vandals thought this was a game,” Breed said. “They thought this was funny. And it’s not funny.”

We are implementing a curfew that will start tomorrow at 8pm.People are hurting right now. They're angry. I'm angry.The City and the police will support peaceful protests, as we did all day today.We can't tolerate violence and vandalism. Now is the time to go home.

“We responded to dozens and dozens of fires throughout different parts of the city that were intentionally set,” Nicholson said.

The 8:00 p.m. to 5:00 a.m. curfew does not apply to essential workers. According to a press release from the city, the curfew excludes: law enforcement, firefighters, other City and County employees engaged in authorized emergency operations, members of the National Guard, authorized representatives of the press and people experiencing homelessness.