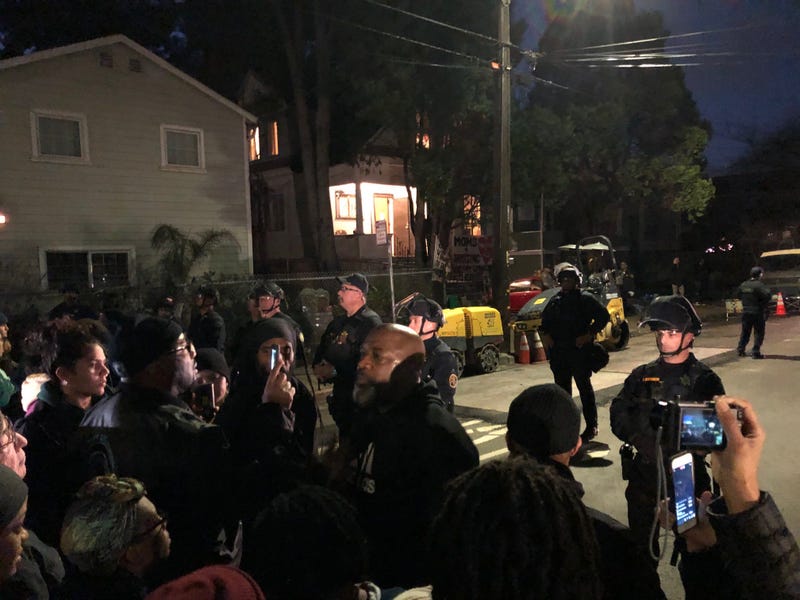 OAKLAND (KCBS Radio) -- Alameda County Sheriff's deputies, some in riot gear, broke down the door of a home in West Oakland  before dawn Tuesday morning, ending the occupation by a group of squatters calling themselves "Moms 4 Housing".

Two of the women were arrested, along with a man who was inside the home. Anotehr man was arrested outside. All face misdemeanor charges.

The group of women and children started moving into the house at 2928 Magnolia Street in mid-November. The home had been purchased by Wedgewood Properties for $501,078 at a foreclosure hearing. An Alameda County judge issued an eviction order on January 10.

Wedgewood made several offers to the group, including help with moving costs and alternative housing for two months.

The offers were rejected, with the squatters saying they wanted to call attention to Oakland's homelessness crisis as well as the number of vacant investor-owned properties in Oakland and the wider Bay Area.

One of the women, Dominique Walker, issued a statement after the eviction, saying in part, "This isn’t over, and it won’t be over until everyone in the Oakland community has a safe and dignified place to live."

Several people were handcuffed and detained during the Tuesday morning eviction. A crowd gathered, alerted by social media posts. Some shouted at sheriff's deputies and the group broke into chants of "Shame!".

Alameda County Sheriff's Sgt. Ray Kelly told reporters the agency was in a "very tricky position", facing a five-day legal deadline to carry out the eviction amid growing activist attention to the case.

He defended the use of a battering ram to enter the home. "The doors were barricaded, they had fortified the doors," said Kelly.