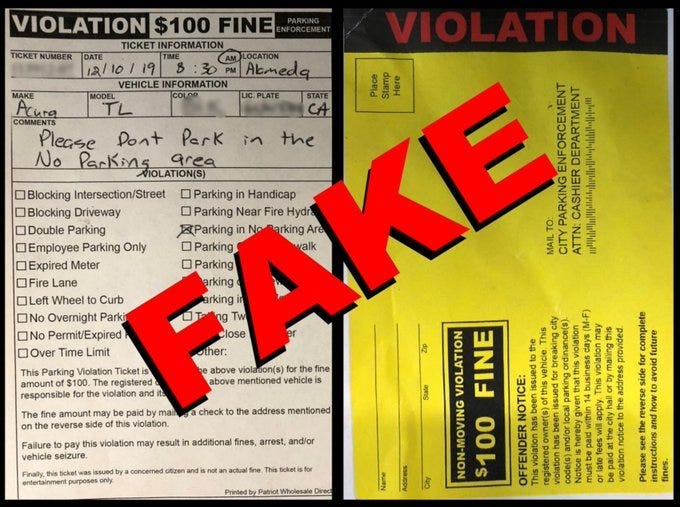 Photo credit Alameda Police Department
By All News KCBS Radio KCBS All News 106.9FM and 740AM

Drivers in Alameda have been alerted that fake parking citations have been recently found on cars, the city's police department said.

A clerk discovered the deception when a driver showed up to pay the apparent $100 fine. Although the document was elaborate, it was a hoax and not intended to defraud anyone, the police said Wednesday.

Text on the ticket revealed that it was not issued by an official entity.

"Finally, this ticket was issued by a concerned citizen and is not an actual fine," it says. "This ticket is for entertainment purposes only.”

The homemade material also was not made to appear as if it were issued by city officials and lacks references to Alameda Municipal Codes, the police said.

For further clarity, the police department posted photos of genuine and phony tickets on social media.

#APDAdvisory: APD warns the public about the possibility of fake parking tickets after one was brought in for payment.The ticket did not appear as an attempt to defraud anyone & should be disregarded if received, especially when legally parked. https://t.co/KJ1sZoTAY3 pic.twitter.com/VoppJJ5Lta

The fake tickets are elaborate, but differ from legitimate citations in several ways, the police said.

"The tickets do not appear as an attempt to defraud anyone and should be disregarded if one appears on your windshield, especially if you are legally parked," the police said.