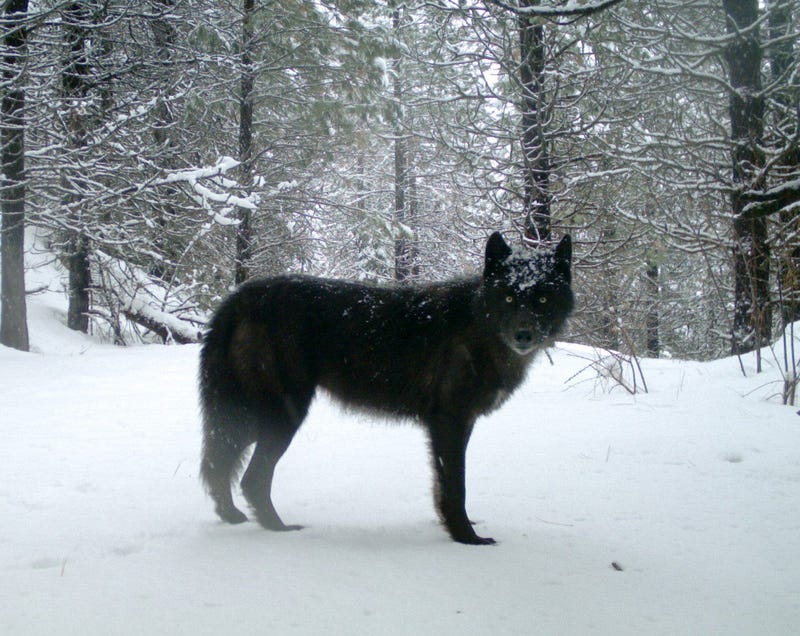 Photo credit Center for Biological Diversity
By Matt Bigler KCBS All News 106.9FM and 740AM

Federal authorities are offering a reward for information regarding the killing of an endangered gray wolf near the Oregon border. This is first illegal shooting they’ve investigated since gray wolves returned to the state.

In late 2018, wildlife biologists in Oregon put a GPS collar around a gray wolf, known as OR-59.  They tracked the predator as it crossed into California. On December 9 that year, researchers received a "mortality signal" indicating the wolf had died in Modoc County.

“The death was determined to be a single gunshot wound, caused by a .22-caliber center-fire jacketed bullet,” John Heil with the U.S. Fish and Wildlife Service said. “We’re still trying to find out more information about it, and that’s why we’re asking for some assistance from the public to provide any information.”

There are fewer than a dozen known wolves in the state, according to the Center for Biological Diversity.

Heil says they are offering a $2,500 reward in the case, their first gray wolf poaching case here in decades. The Center for Biological Diversity added a $5,000 reward, bringing the pot to $7,500.

“The reward is being offered because we’re looking for some more information about what happened to the wolf,” Heil said.

Gray wolves are an endangered species. In 2011, a wolf ventured into California, becoming the first of its kind in the state in nearly 90 years, the Center for Biological Diversity said.

While this return to  California has been celebrated by environmentalists, they have few fans among ranchers. The government nearly drove the animals to extinction in the early 1900s through an eradication program to protect livestock.

Correction: An earlier version of this article misspelled John Heil's name. We regret the error.