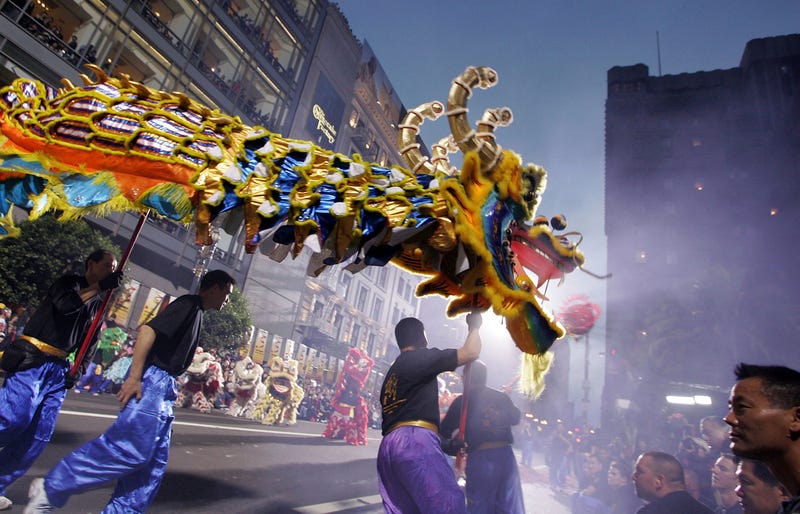 Celebration of the Chinese New Year reaches its peak in San Francisco this week with Saturday evening’s big Chinese New Year Parade, along with the two-day Chinese Community Street Festival.

With baseball season right around the corner, several thousand fans are expected to attend the annual Giants Fan Fest at Oracle Park on Saturday. If you're into golf, you may have your eyes on the Monterey Peninsula, for the Pebble Beach Pro-Am Weekend.

There will be some noticeable disruptions to mass transit service. In San Jose, VTA will have a bus bridge in place on both weekend days due to light rail track work. Track work will also cause some East Bay BART riders to experience up to 20-minute delays on Sunday.

Back in San Francisco, Sunday night will bring street closures to the Financial District, as crews shoot scenes for the new “Matrix” sequel. And Monday morning will see some system-wide BART schedule adjustments.

Sat, Feb 8 and Sun Feb 9, all day: Due to on-going light rail rehabilitation, VTA will once again be operating a weekend bus bridge. This time it’s in both directions between the Paseo de San Antonio Station and the two other stations: Tamien on the Blue Line and San Fernando on the Green Line. Full details are here.

Sun, Feb 9 starting at 8am (start of service), continuing all day: BART riders traveling between South Hayward and Union City should expect 20-minute delays through the area, due to single-tracking, made necessary by resurfacing work on the trackway. Also, some trains may be turned back in order to maintain BART’s overall schedule.

Sat, Feb 8 from 10am-3pm: Oracle Park: San Francisco Giants Fan Fest happens, rain or shine. About 30,000 people are expected to attend and enjoy the opportunity to get an autograph or a photo with a player, coach, or alumnus, or to watch as the media conduct live interviews, etc. The organizers tell fans up front “lines will be long” for those autographs and photos, but there’s also the Will Clark Experience; the 2010 World Series Experience; Dunk a Dodger batting cages; Speed Pitch in the Fan Lot and more.

San Francisco: Chinese New Year Parade (celebrating the Year of the Rat) takes place, rain or shine. The parade starts off on Market Street at 2nd Street and winds to the finish at Kearny Street and Columbus Avenue.The parade is free to attend, unless you want buy a seat in the bleachers.

Sun night, Feb 9 from 6pm-5am: Sunday night in San Francisco’s Financial District/Downtown and you feel like you’ve taken the red pill rather than the blue pill? That’s because crews are shooting scenes for the new “Matrix” movie and the following street closures are in place:

Mon, Feb 10: BART schedule adjustments go into effect. The new schedule affects all lines to some degree. Most changes are small tweaks, but the first and last trips of the day will be affected: Some lines will start service earlier and some will start a little later; same goes for end of service. BART knows many riders plan their arrival times around the specific train they want to catch and wants to make sure everybody knows about these adjustments ahead of time.

The new schedule is available on BART’s Trip Planner  and on the official BART App.