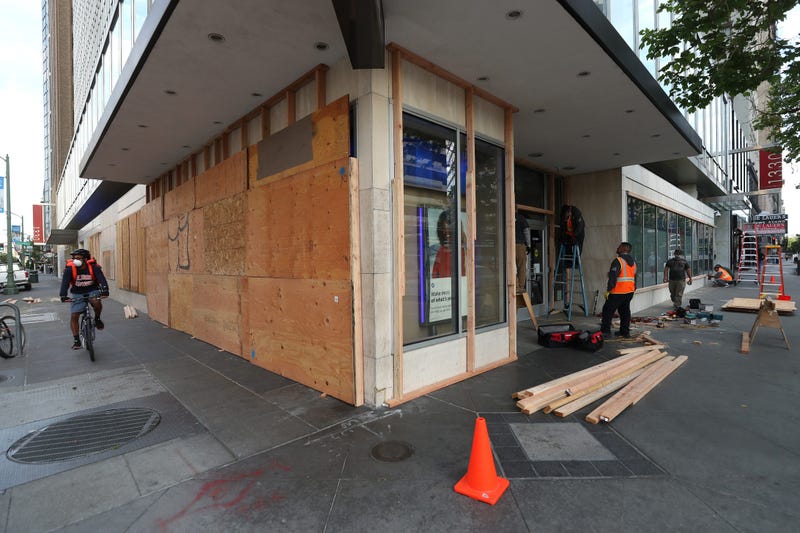 After four nights of tear gas, the streets around Oakland's police headquarters were clear Tuesday night as police chose not to enforce the 8 p.m. curfew as protests remained peaceful.

But for small businesses, the aftermath of unrest is not just sweeping up glass and boarding up the windows. It is taking inventory of losses, dealing with insurance and figuring out if and when you can open during curfews.

“It’s been pretty tough and this just made it a lot tougher,” says chef Kyle Itani, who owns Itani Ramen and Hopscotch Restaurant & Bar, both in downtown Oakland.

He considers himself pretty lucky as his restaurants have been graffitied but suffered no other damage, partly because he closed up early on Friday and boarded up the windows before the neighborhood saw violence. But that also means he missed out the usual peak weekend business.

In the face of virus restrictions, protests and now curfews he has had to constantly adapt his plans.

“We’re just playing it by ear. We’ve kinda been doing that ever since the whole coronavirus thing started. We’re like, ‘here’s our plan for the week’, but we’ll change it day by day, hour by hour. Whatever we need to do,” he says. That includes filing federal paperwork for loans, laying off and then bringing back staff, changing opening and closing hours and now monitoring twitter to adapt to protests.

These are the dilemmas facing many small businesses, which contribute to the color and character of a city.

“We all love Oakland for so many reasons but part of the fabric of Oakland is the independently owned businesses,” Itani says. “Restaurants, retail shops that are in a perilous situation, whether or not they’re going to make it through the COVID era and then to have to pay deductibles or just take losses on things broken or looted is kind of a nail in the coffin.”