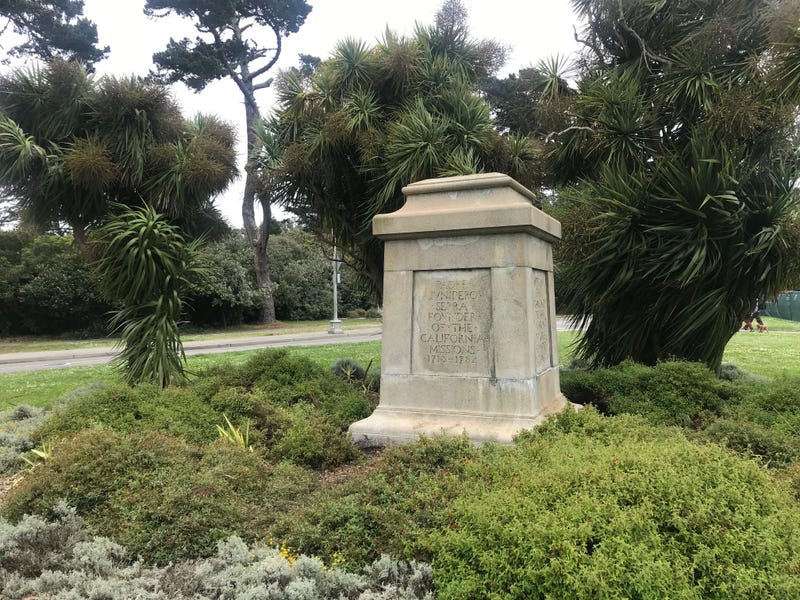 Three statues of controversial figures were toppled in San Francisco's Golden Gate Park on Friday night, however, the choice of one of those statues has some historians scratching their heads.

One statue to come down was a 30-foot-tall figure of Junipero Serra, founder of the mission system in California. Figures in the likeness of Francis Scott Key and Ulysses S. Grant were also were torn down by crowds of protesters.

According to KPIX, San Francisco Police responded to the park but didn't intervene. Police said the crowd threw objects at the officers, however, no injuries were reported. The crowd dispersed about one hour after arriving and reportedly vandalized several statues and landmarks.

"The whole notion of the Spaniards coming north from Mexico and trying to forcibly to Christianize the Californians who were here who were native peoples," Matthews said.

Key, who wrote "The Star-Spangled Banner," was a slave owner.

Matthews found Union army leader and former President Grant to be an odd choice, especially during a protest on the night of Juneteenth.

"He not only was the victorious general," Matthews explained. "He and (President Abraham Lincoln) were a team, but he really did his level best in the face of a lot of political opposition to protect the rights of Black people in the in the South."

"My sense is that this is really a question about who is represented in our public spaces," Ford said.

Ford noted the calls to tear down these kinds of statues could lead to a greater diversity of celebrated figures who have done things to make the lives of all Americans better.

Several statues including Junipero Serra and Francis Scott Key, known for writing the lyrics for the national anthem, were defaced and toppled in Golden Gate Park tonight @KPIXtv #SanFrancisco pic.twitter.com/rEFlLySAG0

"There is very real pain in this country rooted in our history of slavery and oppression, especially against African-Americans and Indigenous people. I know that pain all too well. But the damage done to our park last night went far beyond just the statues that were torn down, and included significant damage to Golden Gate Park. Every dollar we spend cleaning up this vandalism takes funding away from actually supporting our community, including our African-American community. I say this not to defend any particular statue or what it represents, but to recognize that when people take action in the name of my community, they should actually involve us. And when they vandalize our public parks, that's their agenda, not ours.
If we are going to make real change, let's do the work with our impacted communities to make that change. To do that, I have asked the Arts Commission, the Human Rights Commission, and the Recreation and Parks Department to work with the community to evaluate our public art and its intersection with our country's racist history so that we can move forward together to make real changes in this City. Who and what we honor through our public art can and should reflect our values."

The toppling of three statues Friday comes as controversy reigned over other Bay Area statues this week. San Francisco removed an often-vandalized figure of Christopher Columbus from historic Telegraph Hill on Thursday. Protesters in Marin County have also called for the removal of a figure and renaming of a popular thoroughfare bearing the namesake of Sir Francis Drake, a controversial explorer and slave owner.

Similar incidents are happening around the country.