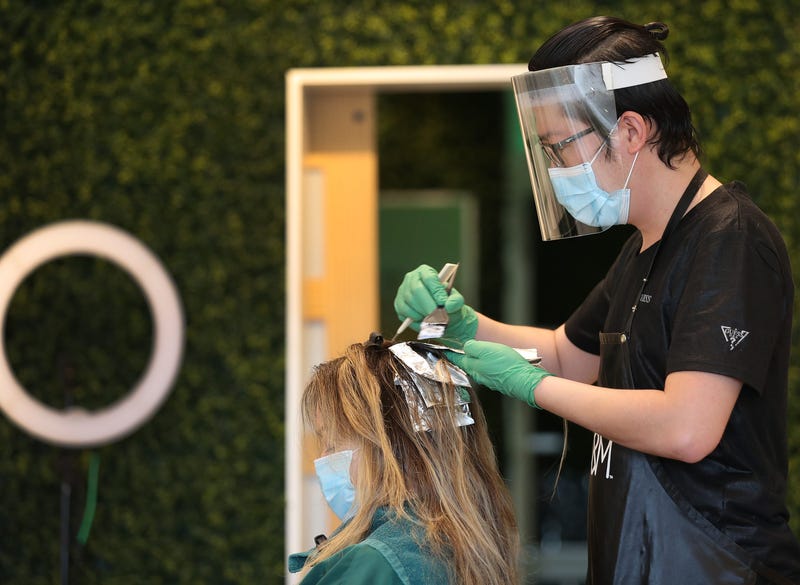 This week, KCBS Radio is taking a look at how the personal care and beauty industry is adapting to its new rules. In part one, reporter Megan Goldsby speaks with stylists who feel left behind.

When Gov. Gavin Newsom made it legal for stylists and barbers to start cutting hair outside last month, some struggling salon owners breathed a sigh of relief, while others felt the new regulations were leaving them behind.

Brooke McGuiness, a licensed cosmetologist and the owner of Hairshop in San Rafael, said she has not been able to transition the salon outdoors.

"The news presented this being a lifeline for us, and it's really not," McGuiness said. "It’s, I think, putting us at risk."

McGuiness told KCBS Radio that 75% of what they’re licensed and trained in is sanitation and disinfection. So, she said she feels most safe working inside the salon, where she can use all of the techniques she’s learned.

That’s a common complaint among stylists, with some saying that having to transfer to working outdoors is like preparing dinner while camping, as opposed to in a kitchen.

McGuiness said that another obstacle is having to file for a permit to work outside.

However, a permit is not required by every city or county in California. Under the new regulations, cuts outside must be dry. Hair washing or coloring are not permitted, and that is McGuiness’ specialty.

She said that means she makes more on unemployment than she would by doing a few dry haircuts, especially because reopening outdoors is not cheap.

"You have to have a tent covering, to protect clients from the sun and heat stroke," McGuiness said.

The California Department of Consumer Affairs set the new regulations, and a spokesperson told KCBS Radio that they are focusing on education, not penalization, if someone isn’t following the rules properly. However, McGuiness is more worried about her neighbors than the state.

"Especially in Marin County, there’s a direct line where people can call or email and report people, and you can be fined as well," she said.

McGuiness said she knows other stylists are making a lot of money on house calls.

"I have done some, yeah, but it comes with the risk of being reported, or you know, it’s a constant anxiety of am I following the proper precautions to make sure that I'm safe and that the client is safe," she told KCBS Radio.

McGuiness added that it all feels hopeless.

Yes, some salons are operating outdoors under the new regulations.

In part two of this series, we examine a North Bay salon operating out of a wedding venue space.