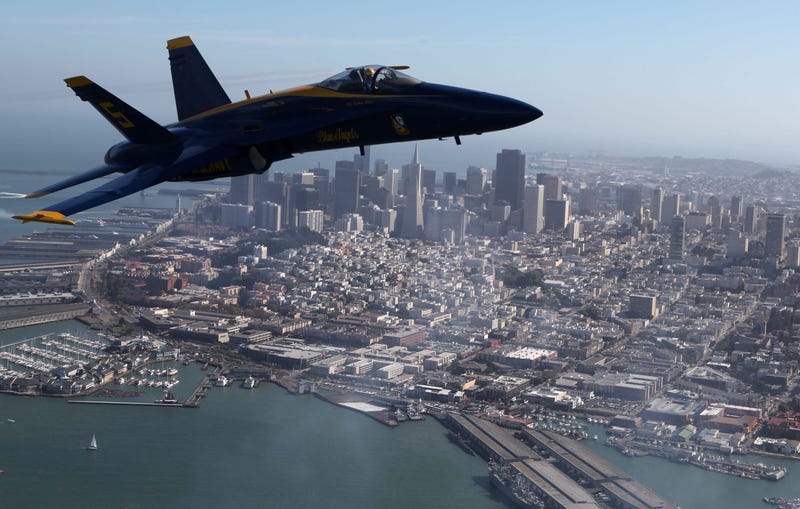 The City By the Bay is the star of the show this week, as two big events bring in the crowds to San Francisco. First, the US Navy caps off Fleet Week events with its big annual air show over the Bay on Friday, Saturday, and Sunday afternoon. On Sunday, North Beachers and others will get to see the 151st Italian Heritage Parade make its way from Fisherman’s Wharf down that long stretch of Columbus Avenue toward Washington Square.

On Saturday, Alameda’s annual Classic Car show returns to Park Street. On the Peninsula, good weather looks to be in store for the two-day San Carlos Art and Wine Faire.

Fri, Oct 11; Sat, Oct 12; Sun, Oct 13 from noon-4pm each day: The US Navy Fleet Week Air Show takes place between the Golden Gate Bridge and Alcatraz, with ticketed seating on the Marina Green at the Fleet Week Festival Center (For everybody else, the show is free). In addition to the US Navy Blue Angels, several other units from different branches of the armed services perform. Muni says a crowd of over 300,000 is expected each day.

From 10am-7pm, Muni’s F Market and Wharves line will be supplemented by shuttle buses running to and from The Ferry Building and Fisherman’s Wharf.

On Saturday and Sunday, CalTrain, in addition to its regular weekend service, will operate one extra northbound express train, departing from San Jose Diridon Station at 9:41am and arriving at the San Francisco Station at 10:45am.

Also on Saturday and Sunday, starting at 1pm (due to anticipated heavy congestion), the Powell-Hyde and Powell-Mason cable car lines will be served by buses.

Sun, Oct 13 at 12:30pm: The 151st Italian Heritage Parade roams from Fisherman's Wharf to North Beach. Parade viewing is available throughout the entire route. The parade should last about two-and-a-half hours and 150,000 people are expected. Traffic through the Fisherman’s Wharf and Russian Hill areas will be heavily congested (and don’t forget the Fleet Week Air Show happening today as well!)

Streets on the parade route will have a rolling closure, starting around 12 noon.

Good news for BART riders this weekend: BART’s Lafayette-area track rebuilding project will NOT have any impact on BART’s service schedule this weekend.  The next time the schedule will be impacted is next Saturday, October 19 (when there will be single-tracking between Walnut Creek and Orinda resulting in up-to-30-minute delays.

Sat, Oct 12 and Sun, Oct 13, all day: VTA’s Blue Line 901, which runs between Alum Rock and Santa Teresa, and Green Line 902, between Mountain View and Winchester, will have a bus bridge in place this weekend, in both directions, between the Civic Center and Children’s Discovery Museum/San Fernando light-rail stations. This is due to ongoing light rail rehabilitation work and will involve some delays, so passengers should allow themselves some extra travel time. Full details are available for Lines 901 and 902 at VTA’s website.