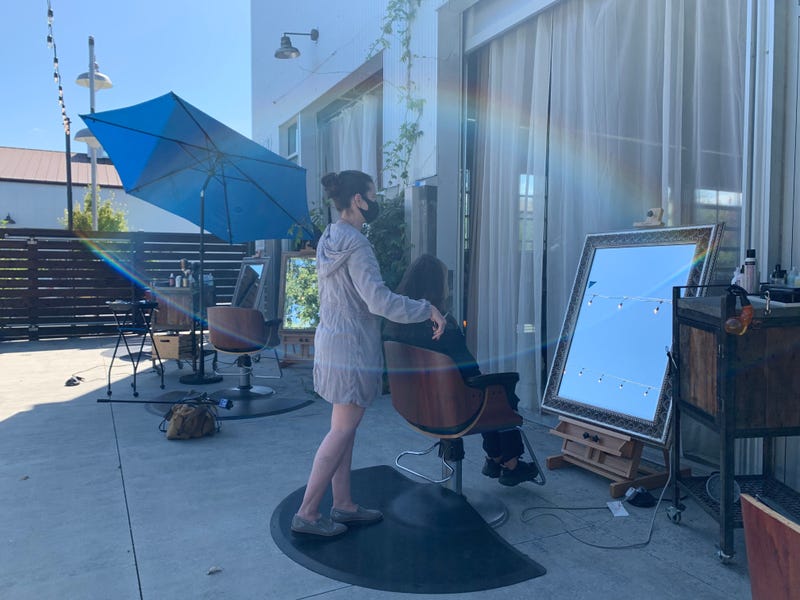 This week, KCBS Radio is taking a look at how the personal care and beauty industry is adapting to its new rules. In part one, stylists speak out about feeling left behind by the state. In part two, KCBS Radio reporter Megan Goldsby looks at some who are making it work.

Reframe Hair Gallery is the name of Nevuah Tovah’s salon in Sebapstopol, but right now that name is also a way of life.

“Us stylists have to be resourceful and adapt to survive,” she said.

But survival isn’t the word that comes to mind in the new salon space she and her crew create each day in the outdoor event center at the Barlow. The area is usually used for her weddings, but now she and her team bring out mirrors propped on easels with flowing curtains and a hedge of white roses to build outdoor stations.

“Clients like it so much I’m a little bit nervous they’re not going to want to go back into the salon,” said Tovah. “I think it’s almost like camping. You know, you’re a little bit roughing it, you have the elements but it’s also really nice.”

Nice to be outside, but also really nice to be working again. But her colleague Rebecca Reedy, stylist and teacher at the salon, says they are making it look easier than it is.

“It’s a whole new learning curve, it’s a lot of labor,” she explained. “It’s backbreaking bringing your equipment in and out and sterilizing. You have to have a lot of pairs of scissors, a lot of combs to get the job done. But nothing’s worth the risk of people’s health.”

Some services like hair washing and coloring are also not allowed, and they are seeing fewer clients each day. “Half the income, twice the work,” said Reedy.

But they say it is worth it to see their client’s happy faces again.

“We are like up to our ankles in hair that no one’s been taking care of and you can just see, everyone needs nurturing right now and they want to feel good about themselves and that’s why we’re doing it,” said Reedy.

And clients like Sonoma resident Tina are grateful. “It’s so great. I’m so like, ‘God am I being too vain? Am I going to get sick because I want my hair cut?’ But I felt like today was a very safe experience and it does feel really good to have a good haircut.”

Tomorrow in part three, we’ll look at what it’s like to be graduating cosmetology school at a time when a job is anything but certain.
Nail Salons, Skin Care Services Among Businesses Now Allowed To Operate Outdoors In Marin