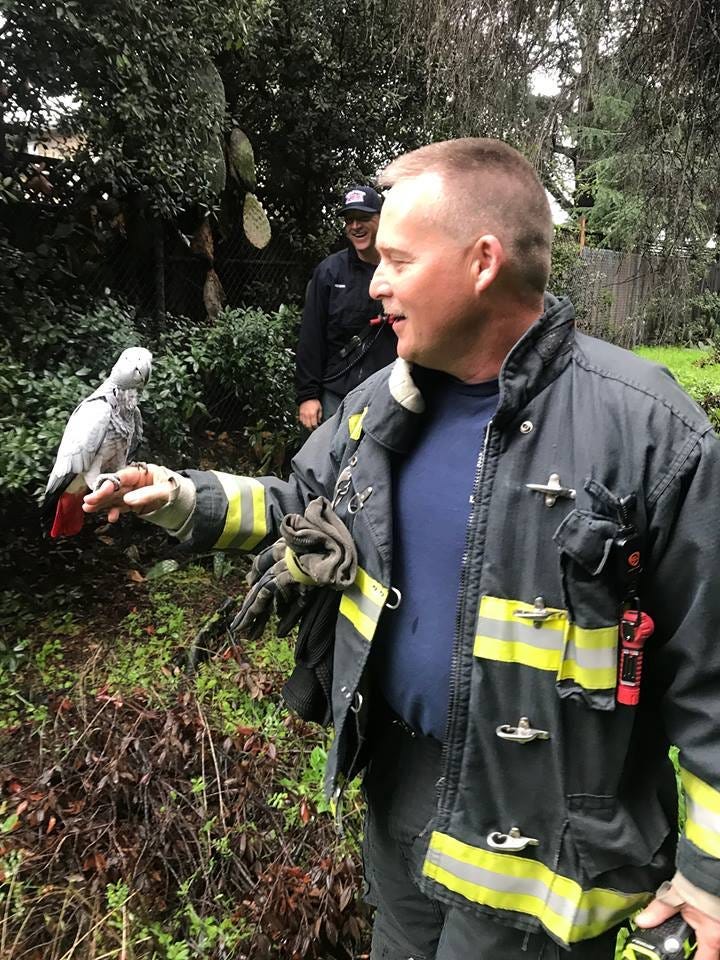 Photo credit Milpitas Fire Department
By KCBS All News 106.9FM and 740AM

MILPITAS – Do you know where your African Grey parrot is?

If not, you may want to call the Milpitas Fire Department. One such specimen was ruffling feathers by remaining proudly perched on a tree behind a Milpitas home for a few days. Residents reached out to a number of agencies, but were eventually told to call the fire department.

Fire crews arrived and retrieved the bird from the tree on Sunday.

“He was very friendly.. walked to the edge of the branch. I reached out for him, and he climbed right on my hand,” said Batallion Chief Brian Stelling, who led the crew on the avian rescue.

Stelling is now the temporary owner of the parrot, but if the bird’s true owner can’t be found over the weekend, it will be sent to Christy Souza’s avian sanctuary in Gilroy on Monday.

Souza points out that lost birds aren’t like lost dogs, who stick to the streets—birds can fly wherever they please.

That means a lot of lost birds of late. “More people own birds, birds are the number three household pet,” she told KCBS Radio.

Because of the bird’s relatively high value, there’s real concern that imposters will swoop in and try to claim the parrot.

“There will be people coming out of the woodwork trying to claim this bird,” said Souza.

So for now, officials are staying tight-beaked about the bird’s distinctive features.