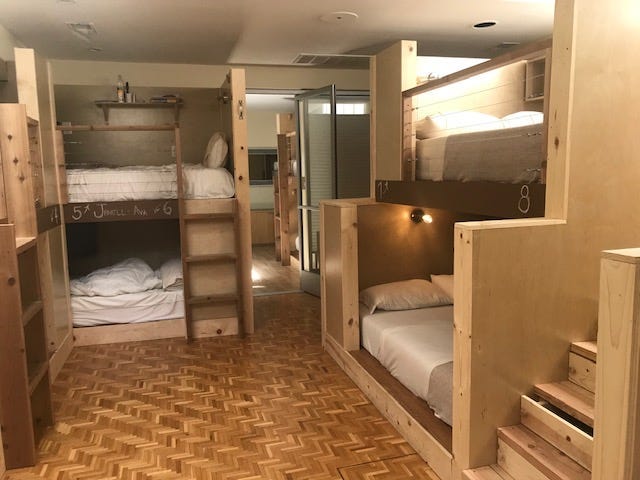 High cost of housing got you down? How about paying $1200 a month, for a bunk bed in San Francisco's Tenderloin?

The Bay Area's latest housing hack actually comes with a little bit more than that.

Podshare, which already has five locations in Los Angeles, made its Bay Area debut last month in a building on a gated alley in the heart of the Tenderloin neighborhood. Founded seven years ago by Elvina Beck, 34, Podshare features stacked bunk beds that rent for $1200 a month. Sharing the monthly cost of housing and splitting it with friends seemed like a good idea to Beck. Now she's made it a business model.

"It's a communal living style, it's very kumbaya," she told KCBS Radio. "You get a normal bunk bed, with TV, outlets, night light, and a whole lot of community."

Tenants also have the run of the house, which includes a fully stocked kitchen, laundry machines, workspaces, couches and plenty of lounging areas to hang out or watch TV. The monthly rent includes all utilities, and Beck keeps the refrigerator stocked with groceries.

Here’s a new possible solution for people looking for affordable space to live in San Francisco. This is Podshare, where $1,200 gets you a queen-sized bunk bed in a 3,500-square-feet Tenderloin home. Video by reporter @dougsovern. Hear his full report on KCBSRadio.com.

"We're building housing for that solo, nomadic individual," Beck said, someone who doesn't have a family and who works freelance or is part of the gig economy, In Los Angeles, she rents her "pods" by the night, week or month, and tenants can hop from one location to the next. But San Francisco housing laws don't allow that. She can't rent out a pod for less than a month here, and even though the Tenderloin location has 16 bunks, for now, she can't have more than six tenants at a time. Beck was not aware of the City's Airbnb law, and other restrictions that limit what Podshare can do. City officials are still exploring whether her concept runs afoul of other local ordinances.

Beck bristled at the criticism. "We're trying to show the City, you want housing? We've got an option. You're making fun of our option, you're not allowing our option, but yet you say you need it."

The Podshare option works for Steven Johnson, who relocated recently from L.A. to San Francisco, where he operates his own business online.

"If you have explored the San Francisco renting market in the past, then this in my personal opinion is luxurious, in comparison to the other options," he said. Johnson said most listings in his price range were either cramped micro-studios, with a fraction of the total space, or shared space in someone's living room. "This is very homey, and big. Yes, you have your bed where you can lay your head and go to sleep. But you can also wander around the rest of the house," which covers about 3500 square feet.

Beck doesn't require a security deposit and thoroughly vets her renters. She will allow couples to share one of the queen-sized beds "but no hanky-panky," she laughs. Sex and drugs are strictly forbidden. "I know people in middle America are like, 'twelve-hundred for a bunk bed, that's ridiculous!' But look at the comps in the area though."

Johnson said the co-housing arrangement is far more fun and affordable than anything else he could find. Besides, he said, "it's like summer camp for adults."

Stay informed with news sent to your inbox by signing up for KCBS Radio's newsletter.