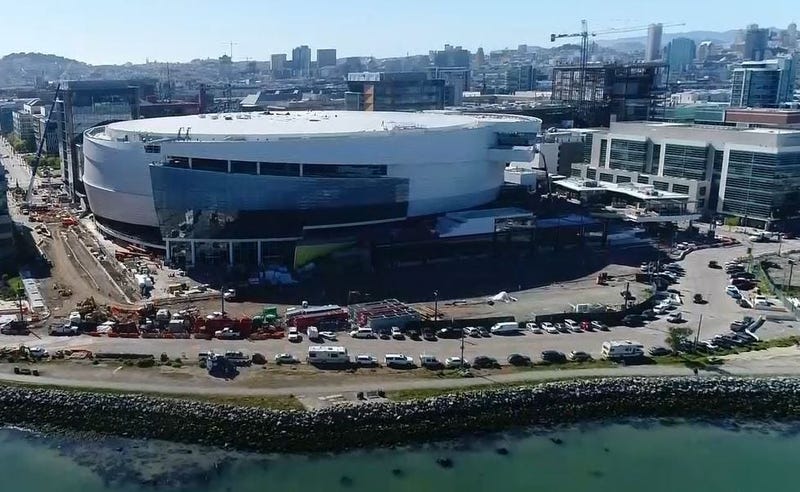 The Golden State Warriors are playing defense on their mega-million dollar deal with Kaiser Permanente, now that it's been revealed how much Kaiser will pay the team.

The expanded partnership between the Warriors and Kaiser is about far more than the naming rights for Thrive City, the plaza that surrounds the team's new Chase Center arena in San Francisco's Mission Bay neighborhood. Internal documents reviewed by KCBS Radio show the health care nonprofit will pay the team as much as $295 million over 20 years, as first reported by KCBS Radio and Chronicle insider Phil Matier. That angers many Kaiser staffers, including Dr. Mickey Fitzpatrick, a clinical psychologist at Kaiser's Pleasanton campus.

"I think it's a misuse of members' dollars," he said, "given that we're grossly understaffed. That's where the money needs to be going, in hiring."

Fitzpatrick said he can only see most of his patients every four to eight weeks, because there simply aren't enough therapists to meet the demand. Only the most suicidal patients, or those suffering extremely acute anxiety, can get in to see a therapist on a weekly basis. Kaiser only has one mental health therapist for every 3,000 members, he said. So he questions why Kaiser is spending almost $300 million on marketing.

"If that's an indication that it's all about the money," said Fitzpatrick, "then it shows you where their priorities are really at." Mental health professionals at Kaiser have been locked in a labor dispute since their union contract expired last September.

"Not at all, no," he said.  A source within Kaiser tells KCBS Radio that only about $50 million of its planned payments to the Warriors are for the Thrive City arrangement. Tyson told KCBS Radio the lion's share of the deal involves developing joint community health projects, turning the Warriors' Oakland practice gym into a new facility called "Generation Thrive" to serve young people, and replacing Stanford as the team's official medical provider.

"There's a small piece around the sponsorship," Tyson said. "But the big piece is around our community health funding, in which every year we spend close to $3 billion through community health, and that's a direct responsibility that we have as a 501(c)3 not-for-profit organization, so it's all about investing in our communities."

Warriors president Rick Welts would neither confirm nor deny that the team will receive $295 million from the health care giant.

"We never comment on the economics of any of our deals," Welts said, "so this will be consistent with that," he said, laughing. "I'm not in the business of telling Kaiser how they should spend their money. They obviously feel the investment moves their mission forward."

But a source within the organization told KCBS Radio the team did approach Stanford about preserving their existing health care relationship, for a significant fee. Stanford declined. So in May, just as they were driving towards a "threepeat," the Warriors players were informed that they would have new doctors, effective July 1st. Welts told KCBS Radio that had nothing to do with how the team handled Kevin Durant's calf injury, which led to a season-ending Achilles tendon tear when Durant returned to play just one quarter of Game Five in the NBA Finals, or Klay Thompson's torn ACL in Game Six. Welts said they were evaluated and treated by the team's Stanford-affiliated physicians, the same team doctors who were with the Warriors before the agreement was reached with Kaiser Permanente.

"We've gotten great health care from Stanford, historically," Welts said. "We will get great health care from Kaiser, going forward, but I think it's part of a bigger relationship that for us makes a lot of sense, just because of the commitment the two companies have to each other." Welts noted that Kaiser's sports medicine group already provides health care for the San Jose Sharks and the Sacramento Kings, "so I think the expertise within Kaiser in dealing with professional athletes, you'd consider second to none."

Kaiser CEO Tyson echoed Welts' confidence in his doctors' ability to treat the Warriors. And he insisted this lucrative deal is about better serving the public, not just enhancing the Kaiser brand by aligning more closely with the three-time NBA champions as they move from Oakland to San Francisco.

Given how the Warriors' season ended, with crippling injuries to two star players in a Finals loss to the Toronto Raptors, Kaiser can expect intense scrutiny of how it cares for the team's prized athletes, especially when it's paying so much for the privilege.

Keep up with the highlights from KCBS Radio's newsroom by signing up here for our newsletter.