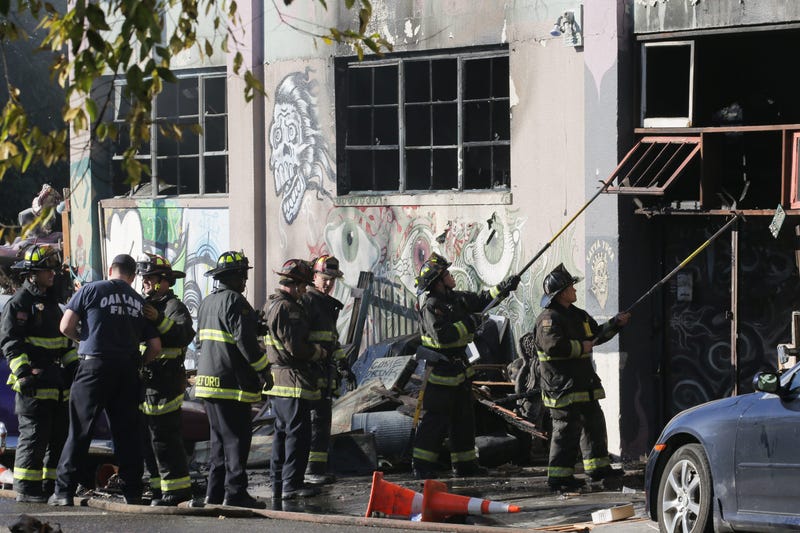 Photo credit Elijah Nouvelage/ Getty Images
By KCBS All News 106.9FM and 740AM

OAKLAND — More than two years after the deadly Ghost Ship warehouse fire in Oakland broke out in December 2016, the trial of tenants Derick Almena and Max Harris is underway.

Almena, the master tenant of the warehouse in the Fruitvale neighborhood, and Harris, who collected rent there and was involved in promoting the music show during which the fire started, each face 36 counts of involuntary manslaughter.

In opening statements on Tuesday, Alameda County prosecutor Casey Bates began made his case to the jury with a slide show of the victims’ portraits. “Count one, Jason McCarty,” he said, and proceeded through 35 more names and faces.

Bates said they had “no notice, no time, and no exit” in the fire. He told the jury he’d show evidence of just one smoke detector and one exit sign in the 10,000-square-foot space where as many as 25 people at a time lived and worked.

Almena is someone who scoffed at suggestions about getting permits for improving the industrial space, Bates said, while Harris hosted and promoted the party that three dozen people could not escape.

Bates played body-cam video of each man telling skeptical Oakland police officers that no one lived in the warehouse. He showed photos of the interior, which he described as stacked from floor to ceiling with flammable materials like pianos and wooden pallets. And he played 911 calls from people who did survive the fire, saying they’d had less than two minutes to fumble, blindly, to safety.

It was an almost 90-minute presentation, with some jurors staring at the defendants at times, and soft weeping from the gallery as victims’ names were read.

Harris’ attorney Curtis Briggs then spent a little over an hour in his opening remarks telling jurors what he believed the defense case would show. Briggs described his client as a “Christ-like, Buddhistic figure” with “a servant’s heart.” He said that Harris was, instead of a creative director or property manager, simply a trustworthy member of an artists’ collective that had no hierarchy.

After a closed session in which jurors, attorneys and the judge discussed a matter of potential jury tampering, the court day ended slightly earlier than scheduled.

The attorney defending Derick Almena, Tony Serra, is set to deliver his opening statement to the jury on Wednesday.