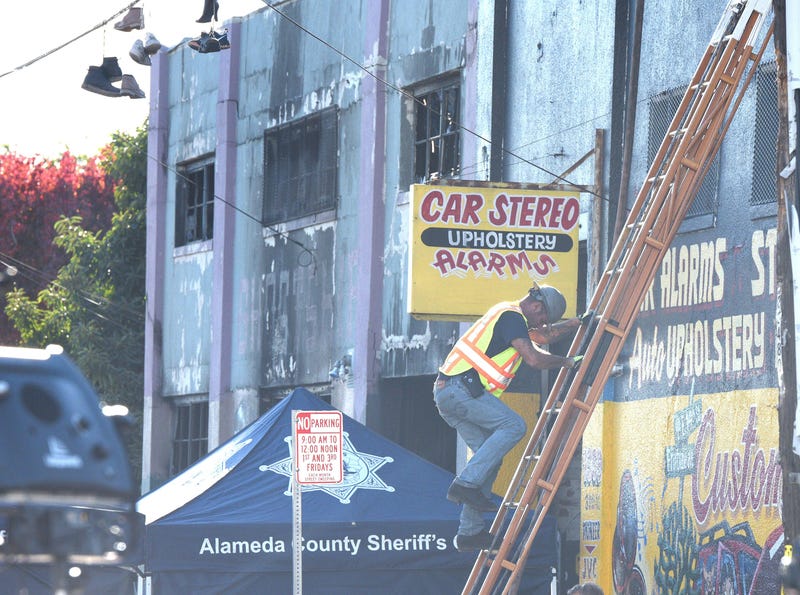 Photo credit ImageSPACE
By KCBS All News 106.9FM and 740AM

OAKLAND — The fourth day of testimony in the Ghost Ship manslaughter trial proved the most emotional so far for the Alameda County jury that will be considering 36 charges each against Derick Almena and Max Harris.

Prosecutors called two former residents to the witness stand, and they had opposite stories to tell.

Jennifer Turner lived in the warehouse for just three weeks in late 2014. She’d been told, after responding to an online ad for a “sinking surrealist pirate theater,” to bring a 50-foot extension cord to power the Airstream trailer inside the warehouse that she rented for $600 per month.

She told the jury she preferred to shower elsewhere and sleep in her car, finding the warehouse too noisy and messy. She testified that she worried about the numerous extension cords, in a warehouse full of “junk” and flammable materials, sparking a fire.

The cause of the deadly fire two years later was never determined.

Almena, the master tenant of the Oakland warehouse, and resident Max Harris could spend decades in prison if convicted in the fire that killed 36 partygoers on Dec. 2, 2016.

Jose Avalos, meanwhile, lived in the warehouse for more than two years and considered it “the safest place.” He described a respectful community of 15-25 people, living without hierarchy or rules beyond “be yourself and make art.”

Avalos broke down in sobs as he described leaving his home, with a dog under each arm and fire overhead, and bumping into a young woman in the hallway. She looked scared, he testified, and was walking around in circles. He told her to follow him out, but could not say if she did. Prosecutor Autrey James asked why not, and Avalos shouted, “I couldn’t grab her!” He never saw her again.

Judge Trina Thompson called for a break as some jurors, victims’ families, and others in the courtroom wiped away tears.

Avalos will continue his testimony when the trial resumes on Monday, May 13.