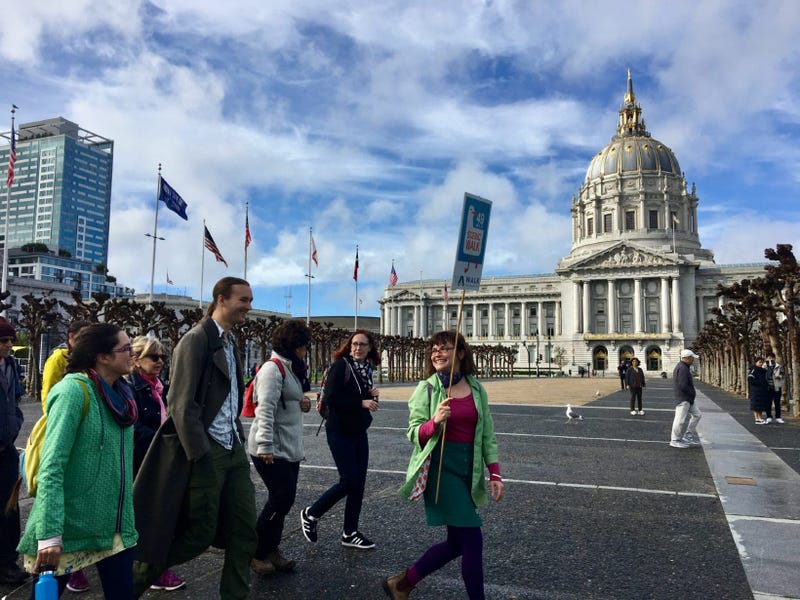 Photo credit Jenna Lane/KCBS Radio
By KCBS All News 106.9FM and 740AM

A classic sightseeing drive around San Francisco for tourists is being reinvented as a pedestrian activity.

A series of walks through October will give amblers a chance to experience a new version of the 49-Mile Scenic Drive.

The jaunts, organized by Walk San Francisco, took inspiration from a guidebook that Kristine Poggioli coauthored. Her guidebook and the walks are consciously modernizing the approach to exploring the city. When the scenic drive was created in 1938, the automobile was in its ascendancy as a mode of transportation.

"The car was just becoming the big thing in the world. Automobile traffic, that was what it was all about," said Poggioli. "What car are you going to get out and drive it in? It was absolutely meant to get in your car and drive around the city, that's the wave of the future."

It was a marketing tool leading tourists to what were then little-known spots like a certain wharf for fishermen. Eighty years later, Walk San Francisco Executive Director Jodie Medeiros likes seeing people slow down and enjoy details they can't at 30 mph.

Jeremy Apthorp joined the walk to see San Francisco in a new way, and found it a little hostile.

"We're constantly getting honked at, cars are beeping, making it hard to be on the street and walk," he said.

Walk San Francisco would like to see the streets where the most injuries occur redesigned.

"We're trying to slow down traffic, shorten the space to cross, fix the timing of lights, and really improve the streets so that people can enjoy the historic splendor of this neighborhood," said Medeiros .

sports
Texans coach Crennel confirms Houston could be seller at NFL trade deadline
news
3 muertes, 121 casos confirmados de COVID-19 tras brote en reunión de iglesia
news
Fauci says you may have to ‘wait several months into 2021’ for COVID-19 vaccine
music
Billie Eilish on quarantine: 'If we get the orange man out, maybe we’ll get to see each other again'
music
Drake served up Mac n Cheese with raisins for his birthday, and nobody is here for that
music
Kanye West tells Joe Rogan why his message is misunderstood: 'It’s not a rant. It’s a symphony of ideas'