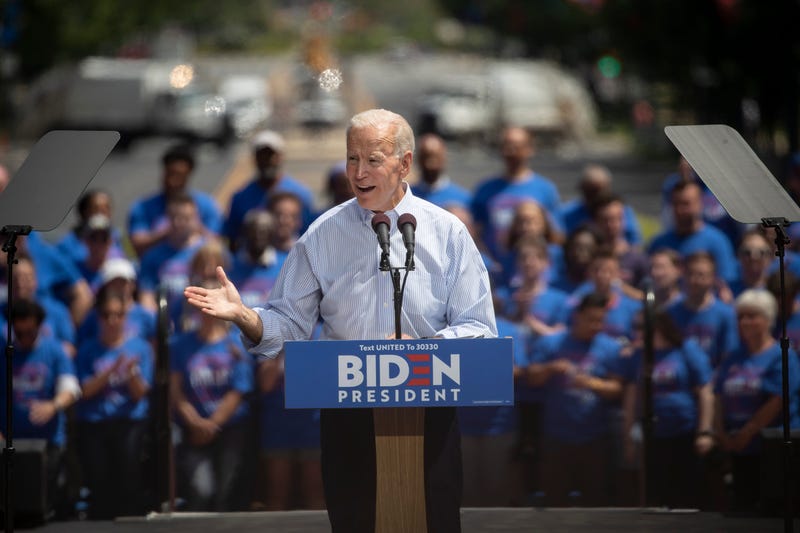 Photo credit Drew Angerer/Getty Images
By KCBS All News 106.9FM and 740AM

SAN FRANCISCO — More than a dozen Democratic presidential candidates will invade the Bay Area this week for the California Democratic Convention at Moscone Center in San Francisco.

But the frontrunner will be conspicuously absent.

Senators Bernie Sanders, Kamala Harris, and Elizabeth Warren, South Bend, Ind. Mayor Pete Buttigieg and 10 other candidates seeking the Democratic presidential nomination will address the state's party members. Some wll also hold town halls and rallies and fundraisers all around the Bay from Friday through Sunday. But Joe Biden, the former vice president, who's well ahead in most polls, is not coming.

“I think Biden is not coming because he doesn’t need to,” said Darry Sragow, a USC professor and publisher of the nonpartisan California Target Book. “For one thing, he is far better known than everybody else running for president as a Democrat.”

The lesser-known contenders need to scrap for support, hoping for a breakout showing in California's fifth-in-the-nation presidential primary, which will be held on March 3, 2020. They will woo the progressive activists who dominate the state Democratic Party, and that is another reason Biden is steering clear, Sragow said.

“Saying the things the delegates to the Democratic state convention [in California] want to hear might come back to haunt you in the middle of the country where the Democrats have to win back the presidency,” said Sragow.

Eleven presidential candidates will address the convention Saturday, followed by three more Sunday. While they're in town, Sanders, Harris, Warren and the rest will also hold town halls and rallies and fundraisers.