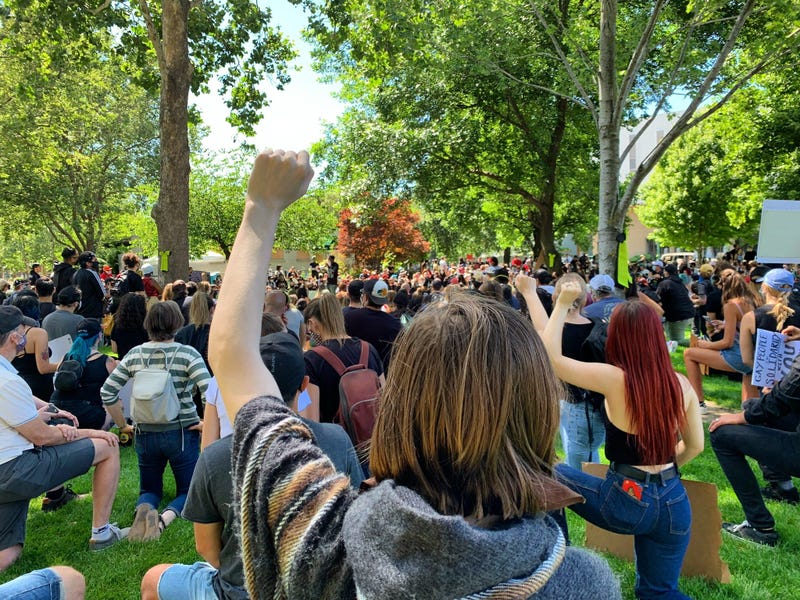 Protests and civil unrest continue throughout the Bay Area and the country in the wake of George Floyd's death at the hands of Minneapolis Police on Memorial Day. KCBS Radio is contuing its coverage in our live blogs with up-to-date information.

Protesters have been marching all day in Vallejo, and about 8:00 p.m., CHP was dispatched to Vallejo Police Department Headquarters on Amador Street, where protesters were heading. We also got reports of a CHP helicopter circling the area at that time. Just before 9:00 p.m., Vallejo police started making dispersal announcements, saying that they'll be making arrests soon for people being out past curfew. At about 9:07 p.m., officers began deploying tear gas at protesters. Five National Guard vehicles arrived today.

The City of Vallejo has confirmed through their Twitter and Instagram that a group of approximately 100 individuals "armed with batteries" and nearly 40 vehicles surrounded the Vallejo Police Department. There are reports of burglaries in progress at 3300 block of Sonoma.
View this post on Instagram

⭕ A group of approximately 100 individuals armed with batteries and nearly 40 vehicles surrounded the Vallejo Police Department. ⭕ There are reports of burglaries in progress at 3300 block of Sonoma. ⭕ Additional resources have been added to the VPD patrol unit, which includes Solano County Sheriffs' deputies and Benicia PD units. ⭕ Five National Guard vehicles have arrived in Vallejo with 50 National Guard personnel. Their assistance was requested earlier today. ⭕ Standby for your next report. *** PLEASE CONTINUE TO ABIDE BY THE CURFEW WHICH IS IN EFFECT FROM 8 PM - 5 AM *** #vallejo #vallejostrong

KCBS Radio's Carolyn Burns reported that people are staked out in front of their businesses on Sonoma Boulevard to ward off looters.

#CityofVallejo. Business owners on #SonomaBlvd are parked with people or friends in cars to back them up, in front of their businesses. 4 to 6 cars each...especially in front of the dispensaries...Way to go!!!@CityofVallejo@KCBSRadio

This follows a day of recuperating after a series of destructive looting and unrest on Monday night.

Police chief Shawny Williams said in a press conference that the last several days have been horrific, and officers were dealing with “hours of chaos" throughout the night. The department received 400 calls for service on June 1 alone, with reports of looting, armed carjacking, burglary, arson, assault on officers and shots fired in the direction of bystanders.

Vallejo has also closed its City Hall until Thursday after a fire was set in a first-floor office, SF Gate reported.

The department said that those looting in the city were organized criminals who drove over from Fairfield after breaking into stores there, and was unrelated to any peaceful protests.

It also acknowledged reports of an officer involved shooting, but any information about the incident will be disclosed until a press conference on Wednesday.

Half an hour after the 8:00 p.m. curfew, protesters are still outside of the capitol in Sacramento and at Cesar Chavez Park. Police officers are present. Most people finally dispersed about 9:25 p.m.

Protesters faced off with police officers around 8:00 p.m. in front of Santa Rosa's City Hall. KCBS Radio producer and writer Mike DeWald got to the scene about 9:00 p.m. and said that the energy of the night's crowds seems to be more amped up compared to previous nights.

More dispersal orders have been issued to the unlawful assembly. We continue to issue these orders because of the sideshows, vandalism, vehicle pursuits, fireworks, looting & violence toward officers. Numerous arrests have been made. GO HOME!

Just before 7:00 p.m., KPIX's Joe Vasquez was in Clayton, where protesters and police officers are kicking smoke grenades back and forth:

Police just broke up the crowd with colorful diversionary smoke grenades which turned into a soccer match. They later used tear gas and dispersed the crowd. #Clayton pic.twitter.com/HCHW0pmmEH

Vandalism and looting were reported at Hilltop Mall in Richmond on Monday night around 9:00 p.m. on Monday night. A police officer suffered minor injuries after being hit by a car when officers were called to the scene. While there were reports of a shooting, the department has said they were false claims and no officers were shot.

There are approximately 40 individuals peacefully marching in the area of Olympic and N. Main Street. Please use caution while driving downtown.

Contra Costa County has implemented a curfew starting Tuesday from 8:00 p.m. to 5:00 a.m. every night until further notice.

At about 8:10 p.m., protesters have made their way to 8th Street and Broadway, the site of Monday's past curfew demonstrations. Police officers are donned in gas masks.

A few hundred protesters are gathered in Oakland, changing, “Hands up, don’t shoot,” and “George Floyd!” around 6:30 p.m. They also peacefully gathered in front of Oakland City Hall before curfew, with many seen heading away from the area by 7:50 p.m., ten minutes before curfew.

Now in Downtown Oakland: chanting demonstrators and a line of officers are squaring off a block from police headquarters, at 8th and Broadway pic.twitter.com/xk4Nm8lONk

Some protesters gathered around City Hall, even after curfew, but the scene remained peaceful. Around 10:30 p.m., people staging a sit-in at 850 Bryant Hall of Justice were arrested for violating curfew orders.

In Fairfield on Monday night, the Solano Mall was a target for looting, where a fork lift was driven into the Best Buy storefront. Other stories at the shopping center were also looted.

There were also reports that vehicles at the Fairfield Acura Dealership on Auto Mall Parkway were being broken into, with more looting reported at the Walmart.

Solano County has implemented one requiring residents to stay indoors as a local emergency from 8:00 p.m. through 5:00 a.m.  The curfew will remain in effect until 5:00 a.m. on June 4, or until the order is either rescinded or extended.

This is a developing story. Check back for updates.
Curfews Kick In As Unrest Over George Floyd's Death Continues In Bay Area, Looting Resumes