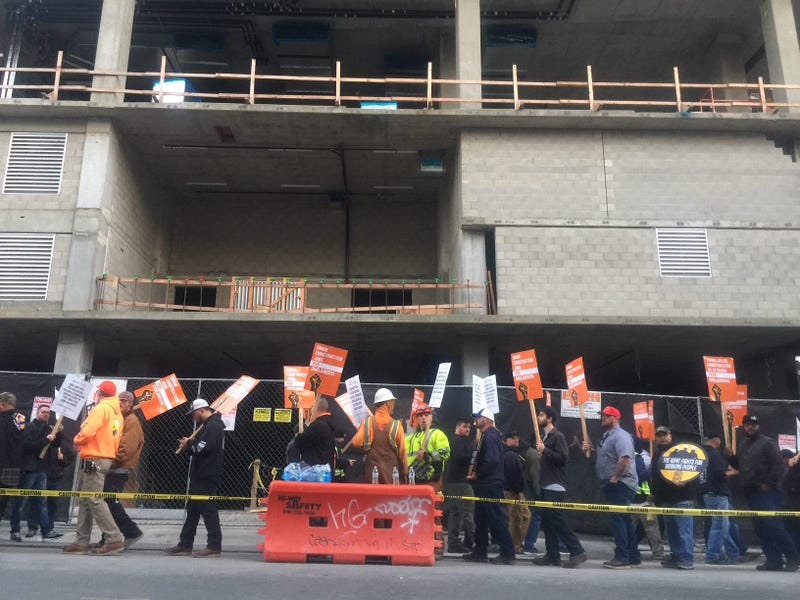 OAKLAND (KCBS Radio) -- A contingent of construction workers staged a noisy rally Wednesday morning outside two Oakland job sites, saying the housing they help build is unaffordable for them.

The Alameda County Building and Construction Trades Council chose May Day, the international workers' holiday, to draw attention to what it said is a a growing problem.  Organizers cited examples of construction workers forced to relocate because they could no longer afford to live in Oakland.

Specifically, the construction unions are demanding the Oakland City Council enshrine labor standards in the Downtown Oakland Specific Plan, which is being written to provide guidance on development in the downtown Oakland area. City officials say the plan, expected to be completed in 2020, will link "land use, transportation, economic development, housing, public spaces, cultural arts, and social equity".

They also demanded the use of "project labor agreements" which would mandate a minimum percentage of jobs on any construction project be reserved for trade union members from Oakland and Alameda County.

Protesters carried signs and chanted slogans invoking the phrase "market-rate pay", a twist on the term used to refer to unsubsidized housing.