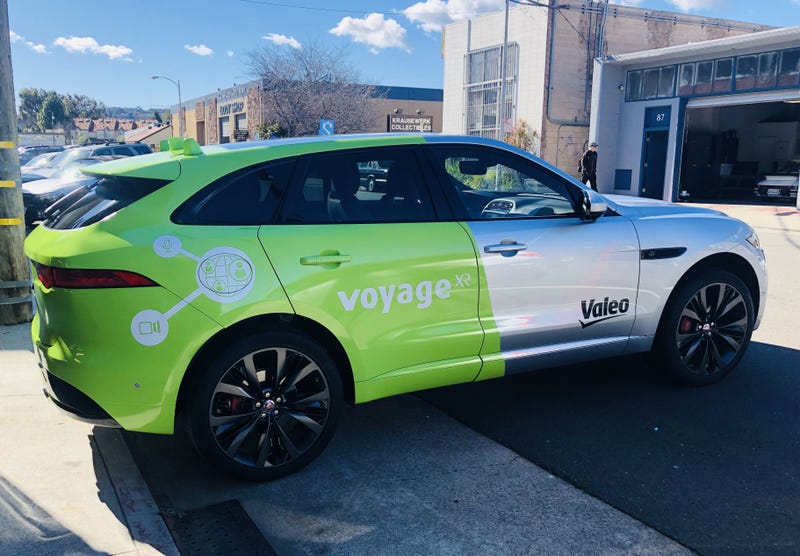 February 25, 2019 02/25/2019 7:37 pm
SAN MATEO (KCBS Radio) — Imagine taking a road trip with your friend or relative who's half a world away. That's what's coming. Valeo, a French automotive technology company, is already developing virtual reality that makes it seem like your far-away loved one is riding shotgun as you navigate through the Bay Area's epic scenery and traffic.

Let's reverse for a moment. Valeo doesn't manufacture cars, but their inventions wind up under the hood of many automakers. If you have a car, there's a one in three chance it has a Valeo system for electrification that includes features like assisted parking sensors and start-stop systems that are also used in self-driving cars.

The company's mobility tech center is in San Mateo, which has become a hub for experimenting with self-driving cars. They've been authorized by California's DMV to put autonomous vehicles on the open roads.

KCBS Radio recently got a ride on the high-tech highway in a Range Rover equipped with ultrasonic, radar, lidar and camera sensors made by Valeo.

All it takes is the press of the button, and the car is driving along. There are six levels of automation — from level zero, which is completely manual to level five, a ride sans steering wheel.

Alexandre Garnault, a technical leader at Valeo, demonstrated the Range Rover's level four capabilities during a spin around San Mateo.

He sat in the driver's seat, but didn't press the gas or brake pedals or keep his hands on the steering wheel.

"So the system is steering the wheel, it's pushing the pedals, and turning on and off the blinkers, it does everything," he said.  "It knows the speed limit, it knows the lanes, where the traffic lights are, and it's constantly monitoring all the surroundings, the cars, the pedestrians, the bicycles that could interfere with the mission of the car."

Come along for a self-driving ride @Valeo_Group 1 of 62 #AutonomousVehicles testing permit holders in CA. 1 in 3 vehicles in the world has a Valeo system for electrification @KCBSRadio pic.twitter.com/aAMjck0j3n

Built-in redundancies make the system extremely safe, according to Garnault.

"You see I'm really comfortable ... and you get very used to it, so quickly," he said.

Riding in a car without an active driver behind the wheel is an exciting sign of things to come. But as driverless cars becomes more commonplace, and fewer people actually engage in the act of driving, Valeo's development team believes people will have more time to connect with one another. That's why Valeo is integrating its sensors with virtual reality, so virtual passengers can come along for the ride.

"What if you could bring others into your car that aren't physically with you," asked Valeo Research and Innovation Manager David Hermina, "and experience the driving as if you were together?"

VR combines with sensors/cameras on #AutonomousVehicles to allow for virtual passengers- share a ride, conversation and digital content and enjoy a 360 view @Valeo_Group @KCBSRadio pic.twitter.com/vH7LRZYw4R

Hermina recently shared a ride to Tahoe with his grandmother, who lives in Puerto Rico. All she needed to enjoy a conversation with her grandson and see the sights of California was a special headset connected to the car's cameras that allowed her to "look" out the windows by turning her head to the left or right.

"So you can see the person, and you can wave and say hi," Hermina said, waving to his grandmother, who laughed and waved back. "Hey, how are you," Hermina asked. "Doing great," she replied.

"Every team member within my team is from a different country," Hermina said. "So we had a lot of motivation for creating a system that could bridge the gap between people."