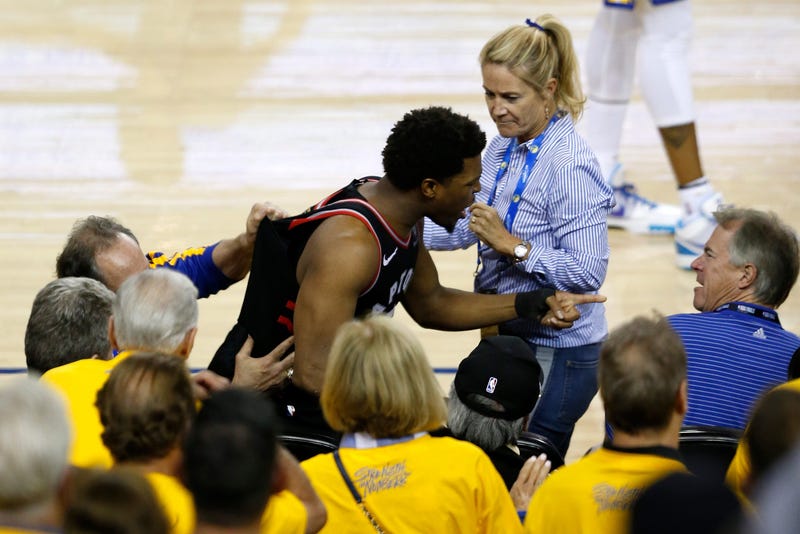 Photo credit Lachlan Cunningham/Getty Images
By KCBS All News 106.9FM and 740AM

The National Basketball Association and the Golden State Warriors announced that team investor Mark Stevens has been banned from all games for the rest of the season, as well as next season.

Stevens was fined $500,000 for shoving Toronto Raptors guard Kyle Lowry during Wednesday night's Game 3 of the NBA Finals at Oracle Arena in Oakland.

Stevens, a venture capitalist, was seated near the court when Lowry dove into the stands, chasing after a loose ball with 10:37 left in the fourth quarter.

That’s when Stevens, 59, was seen “pushing and directing obscene language” towards Lowry, according to a joint statement from the NBA and Warriors. He was ejected from the game shortly after the exchange.

"A team representative must be held to the highest possible standard, and the conduct of Golden State Warriors investor Mark Stevens last night was beyond unacceptable and has no place in our league," the league said in a statement. "As the review of this matter continues, Mr. Stevens will not be permitted to attend NBA games."

Stevens' behavior “did not reflect the high standards that we hope to exemplify as an organization," the Warriors said in a separate statement.

"We're extremely disappointed in his actions and, along with Mr. Stevens, offer our sincere apology to Kyle Lowry and the Toronto Raptors organization for this unfortunate misconduct,” the statement continued. “There is no place for such interaction between fans — or anyone — and players at an NBA game."

Along with the total ban for the rest of the NBA Finals and the 2019-2020 season — which is when the Warriors will play their first season at the new Chase Center in San Francisco — the league ordered Stevens to pay a $500,000 fine.

Lowry finished the game with 23 points in the Raptor’s 118 to 109 victory over the Warriors. The Raptors lead the series 2 to 1 with game four scheduled to begin at 6 p.m. Friday at Oracle.