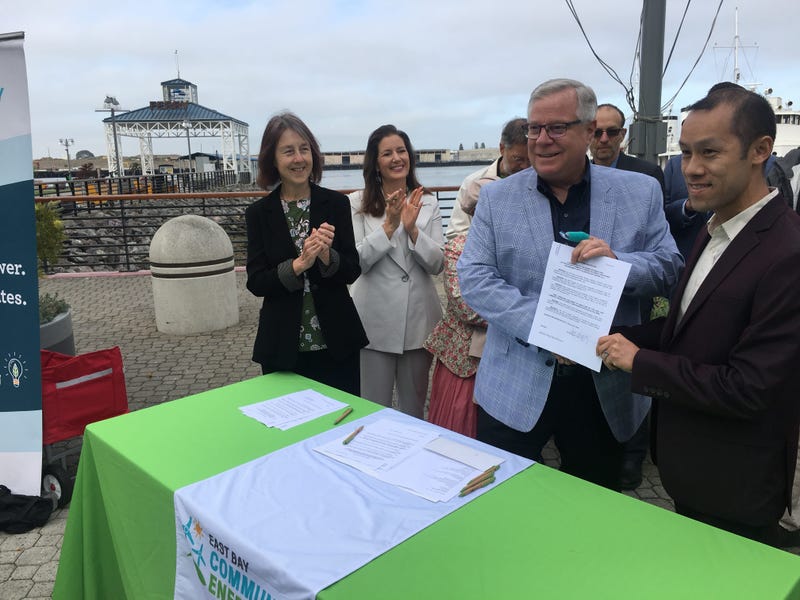 Photo credit Matt Bigler
By Matt Bigler KCBS All News 106.9FM and 740AM

OAKLAND —East Bay residents will soon have more wind and solar electricity coming out of their sockets and some of it will be stored in a soon-to-be-built battery storage facility in Oakland.

On Monday, East Bay Community Energy, a non-profit electricty supplier, signed four contracts for up to 200 megawatts of renewable electricity. That could be enough power for approximately 70,000 homes.

"I am extremely proud to be signing these agreements," said Alameda County Supervisor and the non-profit's chairman Scott Haggerty.

The contracts are for solar power from the Central Valley, wind energy generated by turbines along the Altamont Pass, and a new battery storage facility at Jack London Square, which will replace a 30-year-old jet fuel power plant.

Oakland Mayor Libby Schaaf said it was yet another reason for Alameda County residents to Choose East Bay Community Energy over traditional sources.

"It is cheaper, it is cleaner and it is beholden to the community not to shareholders," said Schaaf.

The new facility will be packed with rechargeable batteries that Nick Chaset, East Bay Community Energy's chief executive,said will mostly recharge at night.

"You're pulling energy from the grid at times of low demand and discharging it onto the grid in times of high demand," he said.

The battery storage project should come online sometime in the next three years but the solar and wind energy will be available soon for most electricity customers in Alameda County.