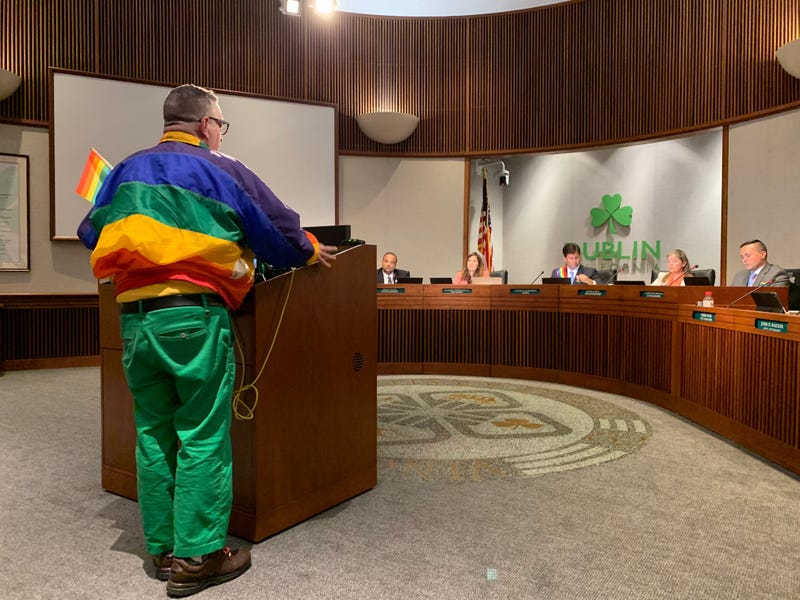 The city has reversed its earlier decision, in which a proposal to fly the LGBTQ flag for one day was rejected, and will now display it through Pride month before taking it down on July 3.

The unanimous decision was accompanied by an apology from Dublin Mayor David Haubert.

Sporting a shiny rainbow sash emblazoned with the word 'mayor,' Haubert walked into the council chamber and told the crowd he was sorry for failing to support the city's LGBTQ community at the previous meeting.

"Let me say I am sorry, from the bottom of my heart, for not sticking up and standing up for you amidst comments that were homophobic," he said.

Some speakers at Tuesday night's meeting wore rainbow regalia and clutched tiny rainbow flags. Many reiterated that comments equating being gay with pedophilia at the previous session were extremely hurtful.

"I've never been more ashamed to be a Dubliner than I was two weeks ago, when members of the public stood at this podium and spoke words of hate towards the LGBTQ community, and three members of my council remained silent in front of that hate," said one man.

Another speaker said for the first time in her life, she was embarrassed to say she was from Dublin.

Haubert told KCBS Radio he's happy not only with the decision to fly the flag, but also with the council's promise to come up with a policy to deal with future proposals to fly other flags.

A critic of the council's decision promised to do just that. "I'm going to be bringing a few flags forward to you, and I'm going to want the same consideration," he said, pointing out that the National Rifle Association's flag is older than the Pride flag.

Another speaker objected to the government getting involved in the discussion at all. "Putting up flags for every group, I don't think that's going to solve our problems," she said. "And it's not, in my opinion, the government's job to promote one group over another, especially on a flagpole."

But the critics were vastly outnumbered, and the evening took on an air of celebration after the meeting ended at just before midnight, when the mayor, the council and community members went out to hoist the flag high, to cheers and applause from the crowd.
Walnut Creek Looks To Fly Pride Flag, But At Least One Official Is Reluctant