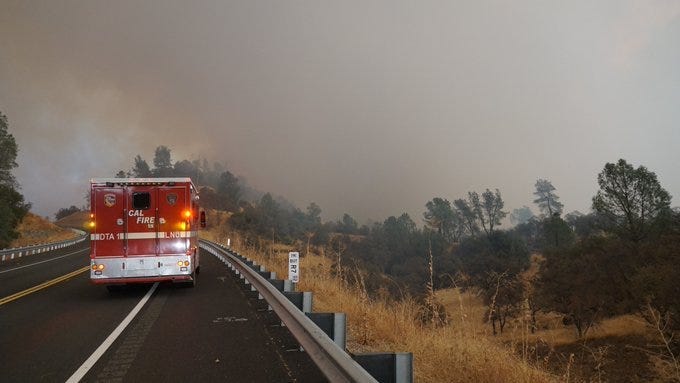 Photo credit Cal Fire
By Melissa Culross KCBS All News 106.9FM and 740AM

"We are still providing assistance. We're still going out and looking at damages and determining what individuals and their families are eligible for," said FEMA spokeswoman Brandi Richard.

Such support apppeared endangered on January 9 when Trump accused California of wasting "billions of dollars" on wildfires due to poor forest management. and said he'd ordered FEMA to cut off funds.

Billions of dollars are sent to the State of California for Forest fires that, with proper Forest Management, would never happen. Unless they get their act together, which is unlikely, I have ordered FEMA to send no more money. It is a disgraceful situation in lives & money!

Richard said that no official order to terminate funding was ever issued.

"We're very interested in making sure that people recover. That's why we work for FEMA. That's why we do this work," said Richard. "We really care about our constituents and the people we support and help."

The Camp Fire in Butte County was the deadliest and most destructive in California's history, killing 86 people and destroying 13,972 homes, according to Cal Fire.

On its website, FEMA says that it has approved $74.4 billion to 7,798 assistance applications for fires in Butte, Los Angeles and Ventura counties in November.