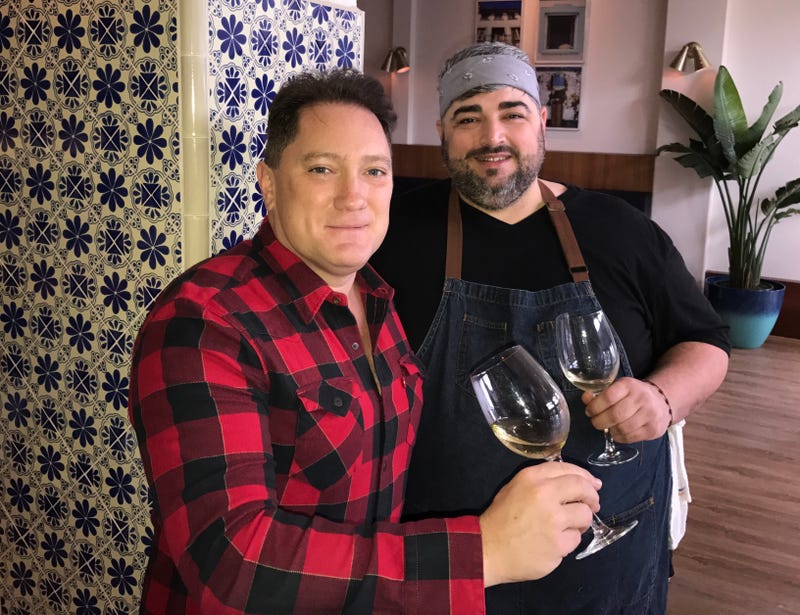 FOOD: COOKING FOR A CAUSE
One of San Francisco’s most beloved Chefs - Chef Telmo Faria of UMA CASA is inviting you to join him for a cooking class for a cause supporting BEYOND DIFFERENCES and promoting an end to teen isolation. The "virtual" class Wednesday at 5 p.m. will showcase flavors from his homeland Portugal. You can watch the class and follow along and I’ll be at Chef’s side as EMCEE. Other chefs partaking in the We Dine Together at Home series include: Chef Dominique Crenn (Atelier Crenn) and Chef Tanya Holland (Brown Sugar Kitchen). Get tickets for the entire series here.

MUSIC: ROY ROGERS ROCKS
Roy Rogers, eight-time Grammy nominee and considered one of the preeminent slide guitarists in the world, will be performing a carefully curated solo acoustic concert set on the new stage at The Center for the Arts Grass Valley on Saturday September 20 at 5 p.m. on Facebook Live. Rogers will bring with him an array of vintage guitars rarely seen from his private collection as well as songs and stories from a career that spans 50 years.

NATIONAL CHEESEBURGER DAY
We are spoiled with so many options on this National Cheeseburger Day, but I have a local favorite from 4505 Burgers & BBQ, that hits all the right notes: Best Damn Grass Fed Cheeseburger: One quarter pound grass fed beef patty with lettuce, onion, Gruyere cheese, and secret sauce on a buttery, griddled sesame & scallion bun. But wait, there's more. Make it Double for an extra $4, add an egg for $2 and add bacon for $2.

FOOTBALL: GO NINERS
Week two of football season and the 49ers have a chance at redemption after last week’s opening day loss. 49ers v. Jets on Sunday at 10 a.m. #GoNiners

GO FUND ME: CAMP OKIZU
A treasured camp for children affected by cancer suffered major fire damage in the North Complex Fire and they need your support in its recovery. Camp Okizu in Berry Creek, Butte County, is a special camp for kids has been a memory maker for so many Bay Area families. Support the recovery effort by donating to the relief fund.

MUSEUM: AFRICAN AMERICAN HISTORY
It’s opening day today in Washington, D.C. for the African American Museum of History & Culture. Can’t make it in person? No worries - there an app for that and includes:
*Stories from inaugural exhibitions
*Virtual tour of what’s new for the opening
*Book your visit

WINE O’CLOCK: PRIEST RANCH WINES
Head to Yountville to the Priest Ranch Winery tasting room. Good news - if you mention Foodie Chap, you’ll get a complimentary tasting with one tasting purchase (buy one get one free). The wines are world class and an instant party on the palate. Don’t leave without trying the Bacon sampler paired perfectly with Priest wines. Reservations are recommended.

﻿AWARD SHOW: EMMY GOES TO…
The stars of the small screen are awarded with EMMYS this Sunday on ABC in a virtual ceremony hosted by Jimmy Kimmel. My money is on The Crown (BBC) for Best Drama, but there will be tough competition from Succession and Better Call Saul. Keep an eye out for Bay Area native Linda Cardellini for Outstanding Lead Actress in a Comedy Series for her role as Judy Hale in Netflix’s dark comedy "Dead to Me." May the best shows win.

Available Monday through Friday from 12 p.m. to 7 p.m. via Postmates or here.

Please do support your local restaurants and small businesses.

They need all the love they can get.