Hundreds of demonstrators took to the streets throughout the Bay Area Wednesday after a grand jury in Louisville did not indict any police officers on charges in the killing of Breonna Taylor.

While former officer Brett Hankison was charged with Wanton Endangerment, the charges accuse him of endangering Taylor’s neighbors, not for firing at Taylor. The grand jury ruled that the shots that killed Taylor were justifiable.

Protestors demonstrated outside of San Jose City Hall, including Abby who told KCBS Radio she wanted to see the officers charged.

“I was hoping so, but because of the way that policing system is set up, it’s incredibly broken so I wasn’t surprised,” she said. “But was hoping for the best because there’s a lot of momentum behind it.” 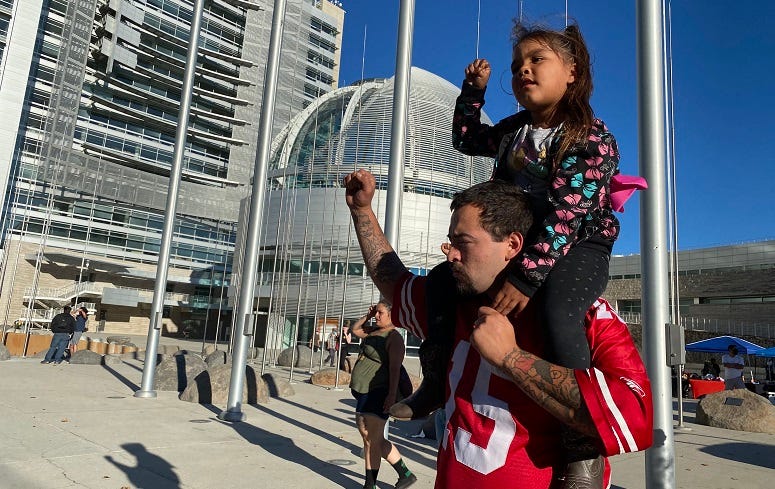 In Santa Rosa, more than 100 demonstrators marched onto the northbound lanes of Highway 101 at Steele Lane and blocked traffic for about half an hour.

A recurring theme among protestors was that the point of “enough is enough” had passed long ago, but they will continue to gather until there is real change.

“I wasn’t surprised. I don’t have a very high expectation of justice in this country,” said Azizah Ahmad, who gathered along with hundreds of others in downtown Oakland. She told KPIX-5, “There’s just no justice for my people and that’s just the truth.”

The protesters gathered at the Lake Merritt Amphitheater and marched to the Highway 24 onramp at Northgate Avenue, briefly blocking traffic before heading down Telegraph Ave until they arrived in front of the Oakland police station.

Families who lost loved ones to police violence showed their solidarity.

Bobby X, the uncle of Oscar Grant who was killed by a BART police officer in 2009, told the crowd in Oakland, “when we show that this is not no single occurrence or isolated situation, when we bring all these families together, it is undeniable what is happening when it comes to police murder in this country.”

And many protestors agreed that while change is slow, that message is gaining ground.

Outside San Jose City Hall, many passing drivers honked their horns to show their support for the Black Lives Matter movement.

But one protestor told KCBS Radio, support alone is not enough.

“If you genuinely believe that this is wrong, then you should be out here with us.”