A few hundred protesters gathered at Oakland’s Lake Merritt Friday night, after a grand jury brought no charges against Louisville police officers earlier this week for the killing of Breonna Taylor.

The large group moved into the city’s downtown, where most businesses are still boarded up from the George Floyd protests.

Multiple people were arrested for assaulting officers, according to the Oakland Police Department.

A large group marching westbound on 14th Street towards City Hall. Some in the crowd are throwing bottles and other objects at officers. Please be mindful when traveling in and around our city. pic.twitter.com/u6R8NDMaIQ

The OPD tweeted that protesters became violent, throwing bottles, cans and other objects at officers.

The crowd is becoming violent throwing bottles cans and other objects at officers in the 1500 block of Harrison. People are also turning over orange barricades and placing them in front of officers. This is causing traffic congestion please use alternate routes. pic.twitter.com/FIuRY9FMP7

Some turned over orange barricades in an attempt to stop police vehicles from following them.

The protest forced the closure of 12th Street BART station, according to BART officials.

“We want everyone to be safe, and so that is always our first strategy – to actually plan ahead of time with protest organizers to facilitate the protests," she said.

The OPD tweeted earlier on Friday that it was aware of planned demonstrations, and would continue to facilitate safe places for peaceful gatherings.

The Oakland Police Department is aware of planned demonstrations in our City tonight. We will continue to facilitate safe places & spaces for peaceful demonstrations. Gatherings may impact roadways, so please be mindful when traveling in and around our city. #OPDCARES pic.twitter.com/VeZ9gP9VT9

“In Oakland, we will celebrate the peaceful expression, the passionate expression of that outrage," Schaaf told KCBS Radio. "We also are very clear on the difference between speech and vandalism."

To that effect, Schaaf said police do have tactics - not all of which are openly shared - to keeping vandalism from happening.

The mayor added, however, that there are no plans to institute a curfew.

Police said there were no reports of damage to businesses. 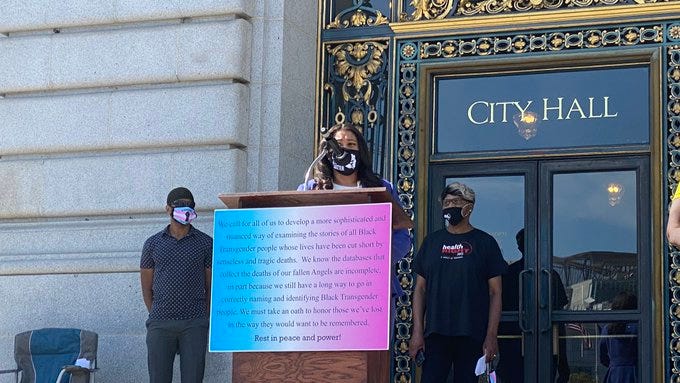