He lurks. He stalks. He attacks.

He is Gerald, the infamous turkey terror of the Piedmont hills.

Gerald wreaks havoc on humans that dare to encroach. We found him in his usual spot Monday, presiding over his harem in the beautiful Morcom Rose Garden.

"We were sitting on that little flat spot and he harassed some people on the other side of the hill and then he made his way across and I was like 'Oh, he’s not coming over here,'" one woman laughed. "Then he came over to us, at which point my friend started to flee. I picked up our sheet and kind of put up a shield and he seemed flabbergasted by the shield. We were having quite the standoff." 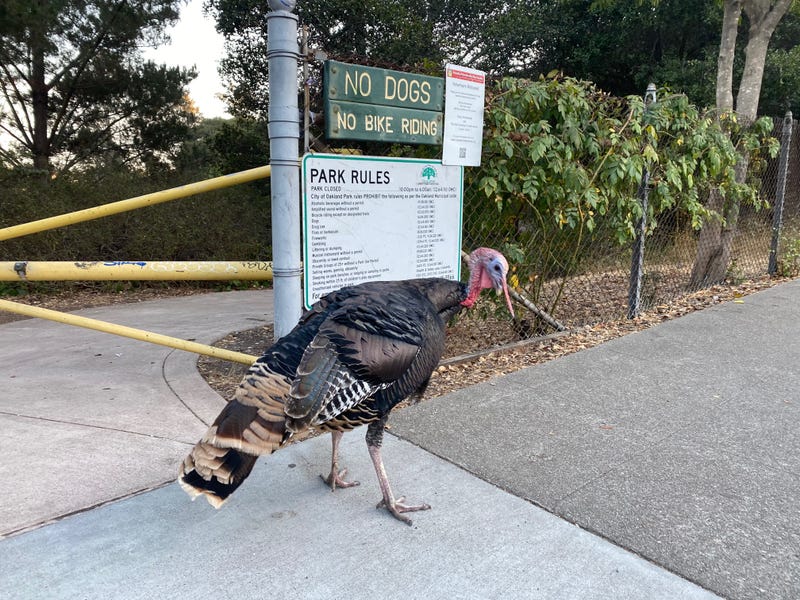 Gerald, as the locals know him, blocks your view of the park's rules. Photo credit Jim Taylor/KCBS Radio

Which, as usual, Gerald wins.

However, he wasn’t finished on this day.

We watched him chase another woman, round and round a tree stump. He’s even been known to draw blood from time to time.

He’s so well known, his removal could be controversial.

But despite the best efforts of animal control, he continues to avoid capture and release into the wild.