In the city’s Mission Bay neighborhood, the problem could be a very expensive one to fix. Here, a big portion of the sidewalk is sinking.

Gaps are visible at almost every street corner. 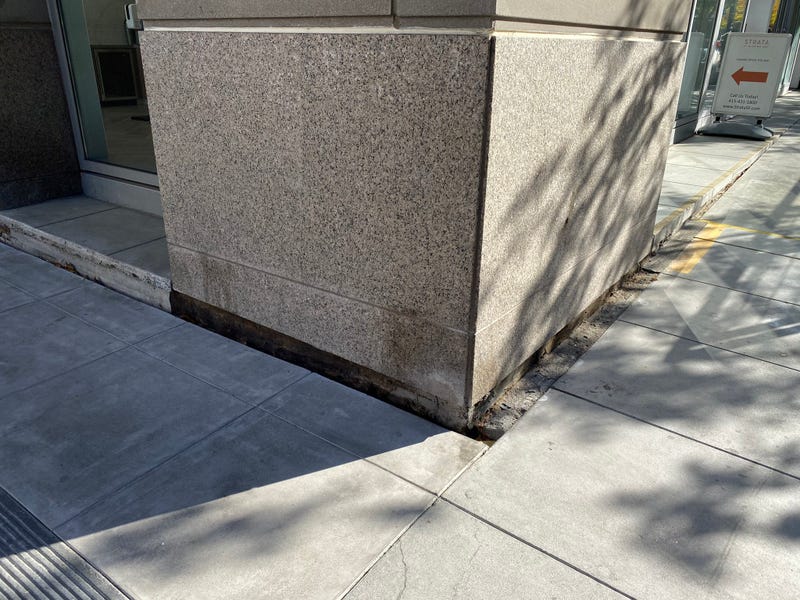 Gaps like this are visible on sidewalks around the Mission Bay neighborhood. Photo credit Carrie Hodousek/KCBS Radio

Business owners say it’s getting too expensive for them to maintain.

"It’s a concern if the sidewalks aren’t repaired," said Rachel Gordon, spokesperson for San Francisco Public Works. "Mission Bay is a neighborhood that’s built on landfill. We knew going in, before the development was underway, that there was going to be some settlement of the streets and sidewalks."

The city’s position is that it’s ultimately up to property owners to address the problems, which comes at a price. Repaving could make the problem worse by making the ground heavier, forcing it to sink faster.

They can either hire the city or a private contractor to do the work.

"The fix could be a complex one," Gordon said. "It may require building ramps or regrading the sidewalk. We want to make sure that passages remain safe for people walking on the sidewalk. We don’t want to have a major tripping hazard."

According to KPIX-5, there were 59 sites reported citywide needing repairs.

Most haven’t been completed yet.