A woman from South Africa is making headlines after posting a photo of herself on Facebook posing with the heart of a giraffe. The woman's husband paid her to hunt it as a Valentine’s Day gift.

Merelize Van Der Merwe can be seen holding the giraffe's giant heart after shooting it to death. 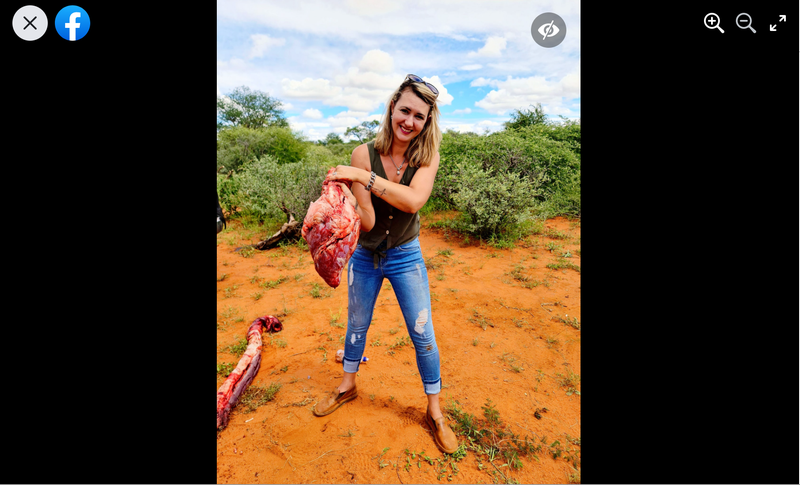 Her post reads: “Ever wondered how big a giraffe's heart is? I'm absolutely over the moon with my BIG valentines present!!!”

“In a civilized and cultivated country wild animals only continue to exist at all when preserved by sportsmen. The excellent people who protest against all hunting, and consider sportsmen as enemies of wild life, are ignorant of the fact that in reality the genuine sportsman is by all odds the most important factor in keeping the larger and more valuable wild creatures from total extermination.”

The avid hunter and mother of one, even posts video of hunters cutting open the heart of the 17-year-old male giraffe.

Van Der Merwe chronicles the hunt in another video showing the giraffe looking over the trees quizzically at her and another hunter, just before she shoots it through the front of the neck. She can then be seen walking to the giraffe at it’s fallen to the ground and firing a second shot.

The images caused an outrage on social media. To which the citrus farmer responded with: “I will put this offer on the table - want to come kill [me] like you said, I'll come and pick you up at the airport and give you the opportunity.

“But if you fail to do so, just make sure you leave your family a big life insurance!!! Because there will not be a return ticket.

“I ain't scared of s*** especially animal rights activists who still lives with mommy because they get triggered by everything so they go to the supermarket and buy their meat because no animal gets hurt there!

“I've been hearing the same old mob stories for years and yet I'm still here and still hunting."

Dr. Mark Jones of the Born Free Foundation told the Daily Mirror: 'Trophy hunting is not a conservation tool, nor does it contribute significant funds to local communities.'