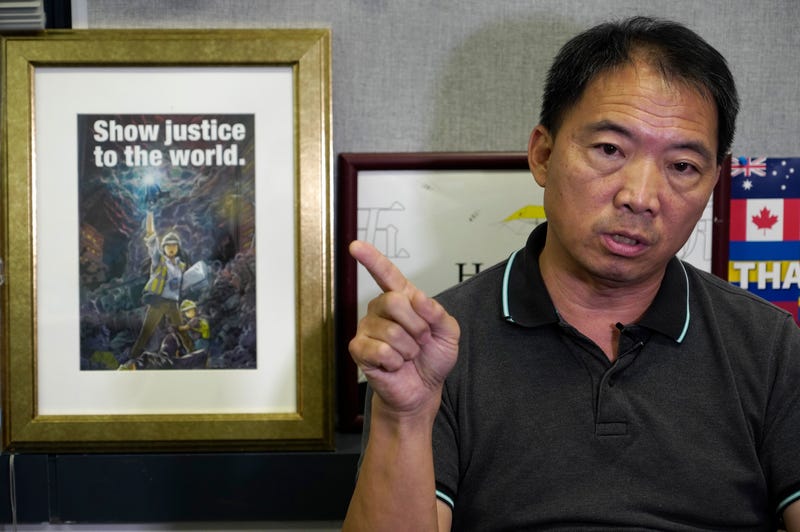 HONG KONG (AP) — When Wu Chi-wai, chairman of Hong Kong’s largest pro-democracy party, decided to serve an extended term in the city’s legislature, he did not expect to resign two months later.

After nearly three decades in politics, the 58-year-old Wu is stepping down Monday. All 15 lawmakers in the pro-democracy camp have tendered their resignations to protest a Beijing resolution in early November that led to the disqualifications of four of their colleagues.

The resignations came at a fraught time for Hong Kong, as Beijing tightens control over the semi-autonomous city. Activists say that China is clamping down on freedoms that distinguish Hong Kong from the mainland.

Since the 2014 Umbrella Movement protests, pro-democracy activists have demanded greater democracy and accused China of going back on its promise to allow the people to vote freely for their leader.

For Wu, quitting was a last resort. He said that staying on would not have changed things, as the pro-Beijing government was determined to push through policies that the pro-democracy camp would not have been able to stop. Pro-democracy supporters will need to rethink how to continue their fight now that so much has changed, he said.

“I kept my promise, I fought to the end,” he told The Associated Press in an interview, adding he hopes those who voted for him would not think that they had done so in vain.

Wu, known for his feisty personality, often delivered impassioned speeches in defense of democracy. He was arrested earlier this year for participating in an unauthorized vigil in remembrance of the bloody 1989 Tiananmen Square crackdown in Beijing, and later again in November for contempt and interfering with other lawmakers during a clash in the legislative chamber in May.

Democracy supporters must keep their determination to achieve their goals, even if it takes decades, he said. He conceded that he doesn’t yet know the path ahead, but sounded a hopeful note.

“I’m getting into a whole new ball game,” he said. “It opens a new imaginative area to imagine the future, because in the past, I was stuck in a … boundary that made me tired.”

For Wu, the fight for democracy has been a long and difficult one, akin to a political career that saw both election wins and defeats.

He was an economics student in the U.S. when he decided in 1991 to return to Hong Kong — then a British colony — ahead of its return to China in 1997 to observe the changes from a transfer of sovereignty. He cut his teeth in politics as a legislative assistant, working for then-lawmaker Conrad Lam, who was part of pro-democracy party United Democrats of Hong Kong.

In the ensuing years, Wu served on municipal and district councils before being elected to the citywide legislature in 2012. Since 2016, Wu has headed the Democratic Party -– Hong Kong’s largest pro-democracy political party.

The mass resignations came shortly after the beginning of an unprecedented one-year extension of the four-year legislative term. That followed a postponement of legislative elections, with authorities citing public safety issues due to the coronavirus pandemic.

Most of the pro-democracy legislators criticized the move as unconstitutional but initially decided to remain in the legislature. Then came the decision to disqualify four of them, which Wu described as sudden, although not unexpected.

“(With) the latest decision, the central government simply tells everybody in the world that … ‘in Hong Kong, we are in total control, everything is under control,'” he said. “So, we need to reconsider the way to fight in the future.”

Wu said the pro-democracy camp could run in future elections, in part to sustain the determination for democracy, but he pointed out that they may not be able to serve their whole terms, citing the recent disqualifications of his four colleagues.

“History repeats in a cycle,” said Wu, pointing to the fight for democracy in the Soviet Union decades ago and the protests in Tiananmen Square.

“The key now is how to keep our determination in the coming time, because it is easy for people to give up when they fail," he said. "We may need to wait for 20 years, and some people may find that discouraging. But ... if we believe in the value of democracy and freedom, we need people to fight for it.”

music
Lady A get the latest invite to the Grand Ole Opry
music
RADIO.COM presents ’90s Country’ with Kelly Ford every Sunday
news
Guard troops sleeping in Congress parking garages sparks outrage
sports
Baseball icon Hank Aaron dead at 86
music
Is Sabrina Carpenter's new song 'Skin' a response to Olivia Rodrigo? The internet has thoughts
sports
Shaq tells Donovan Mitchell ‘You don’t have what it takes to get to that next level’