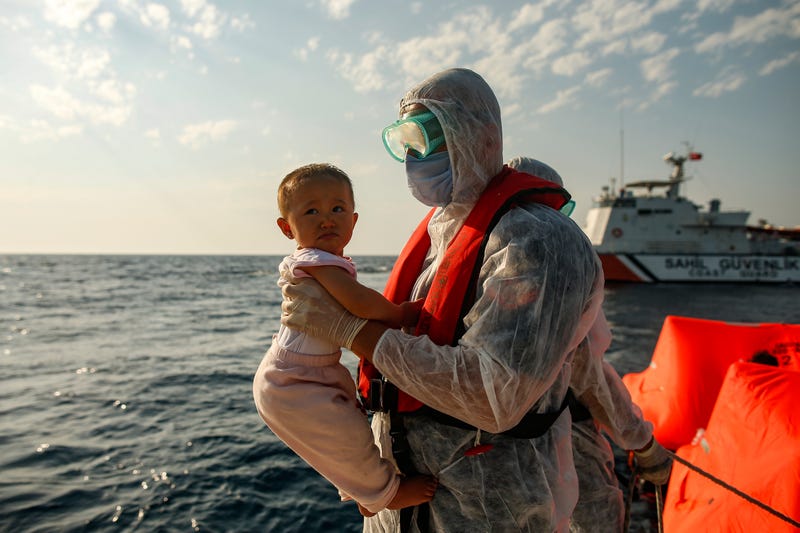 DIKILI, Turkey (AP) — Shortly after reaching the Greek island of Lesbos, a group of Afghan migrants say, their hopes for a new life in Europe were cut short when Greek authorities rounded them up, mistreated them, shoved them into life rafts and abandoned them at sea.

Associated Press journalists on a Turkish government-organized coast guard ride-along were aboard the patrol boat that picked up the 37 migrants, including 18 children, from two orange life rafts in the Aegean Sea on Sept. 12. Two other media organizations on similar government-organized trips in the same week witnessed similar scenes.

“They took our phones and said a bus will come and take you to the camp,” Omid Hussain Nabizada said in Turkish. “But they took us and put us on a ship. They left us on the water in a very bad way on these boats.”

Turkey, which hosts about 4 million refugees, accuses Greece of large-scale pushbacks — summary deportations without access to asylum procedures, in violation of international law. It also accuses the European Union of turning a blind eye to what it says is a blatant abuse of human rights.

The Turkish coast guard says it rescued over 300 migrants “pushed back by Greek elements to Turkish waters” this month alone. Citing what they say are credible reports, international rights groups have called repeatedly for investigations.

Greece, which lies on the EU’s southeastern border and has borne the brunt of migration flows from Turkey, denies the allegations and in turn accuses Ankara of weaponizing migrants.

In March, Turkey made good on threats to send migrants to Europe, declaring its borders with the EU open. In what appeared to be a government-organized campaign, thousands headed to the Greek border, leading to scenes of chaos and violence. Turkey’s border with EU member Bulgaria was largely unaffected. Greece shut its frontier and controversially suspended asylum applications for a month.

Greece’s coast guard says Turkey's coast guard frequently escorts migrant smuggling boats toward Greece, and has provided videos to back its claims. It says under a 2016 EU-Turkey deal to stem migration flows, Turkey has an obligation to stop people clandestinely entering Greece.

Greek coast guard spokesman Lt. Cmdr. Nikolaos Kokkalas said its patrols regularly detect boats and dinghies carrying migrants trying to enter Greece illegally, and “among them many times there are also inflatable rafts such as those described” by the AP.

The life rafts are standard safety equipment on recreational boats, designed to keep passengers safe if they must abandon ship. They generally have no means of propulsion or steering.

Uneasy neighbors Greece and Turkey have been at loggerheads for decades over several territorial issues, and asylum-seekers have found themselves caught up in the geopolitical conflict.