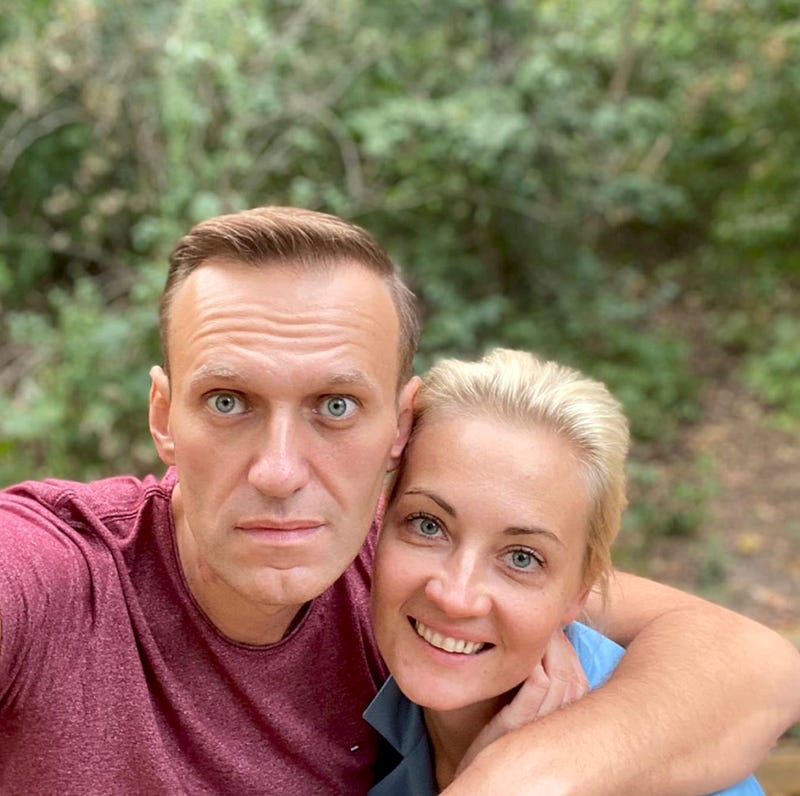 MOSCOW (AP) — Russian opposition leader Alexei Navalny, who is in Germany recovering from what authorities there determined to be nerve agent poisoning, thanked Russian pilots and paramedics for acting quickly after he fell into a coma on a flight from Siberia.

Navalny, who collapsed on a plane to Moscow on Aug. 20 and spent nearly three weeks in a coma, said in an Instagram post on Friday that pilots “quickly landed the plane in Omsk” and medical workers at the airport “jammed a dose of atropine" into him, immediately recognizing “a toxic poisoning.”

“Thank you, unknown good-hearted friends. You are good people," the 44-year-old politician wrote under a photo of him hugging his wife Yulia.

After 48 hours in a hospital in Omsk, where Russian doctors said they found no trace of any poisoning, Navalny was transferred to the Charite hospital in Berlin. German chemical weapons experts determined that he was poisoned with the Soviet-era nerve agent Novichok — findings corroborated by labs in France and Sweden.

Navalny, a longtime foe of Russian President Vladimir Putin, was discharged from the hospital earlier this week. Charite hospital said that based on Navalny’s progress, physicians believe a “complete recovery is possible.”

Russian authorities have been resisting the international pressure to launch a criminal investigation, saying no trace of poisonous substances has been found in Navalny's system and demanding Germany, France and Sweden to share their findings.

The Russian delegation to the Organization for the Prohibition of Chemical Weapons sent a note to Germany on Wednesday, requesting “comprehensive information on the so-called Navalny case," including “test results, biological materials and other clinical samples” to be provided within 10 days.

German government spokeswoman Martina Fietz confirmed Friday that the Germany mission to the OPCW received the note. The mission will respond in keeping with rules that provide for a 10-day deadline, Fietz said.

“But let me repeat again what we have said here repeatedly in the past: Russia already has everything necessary to be able to conduct investigations itself,” Fietz added. She once again pointed out that German, Swedish and French labs have confirmed that Navalny was poisoned with Novichok, and that the OPCW has taken samples.

Navalny has remained in Germany to undergo rehabilitation after being released from the hospital, which may take weeks, his spokeswoman Kira Yarmysh said Thursday. Nevertheless, he planned to return to Russia at some point, according to his allies.

Navalny’s team blamed the Kremlin for the poisoning, claims which officials brushed off.

In Friday's Instagram post, the politician said that “a series of happy coincidences and sharp actions” by pilots and medical workers sabotaged what Navalny said he thought may have been “the plan of the killers.”

“I would fall sick 20 minutes after takeoff, and in another 15 minutes lose consciousness. There was guaranteed to be no access to medical help and in another hour I would continue travelling in a black plastic bag on the last row of seats, scaring all passengers going to the bathroom," the politician wrote.

“Everything that happened next was very dramatic and deserves a separate story, but there would have been nothing to tell if not for these guys."

Geir Moulson in Berlin contributed to this report.