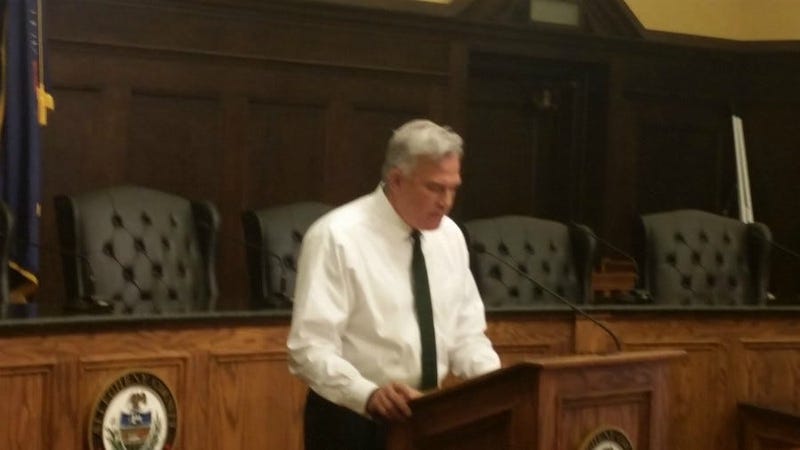 PITTSBURGH (Newsradio 1020 KDKA) – In a letter to Pittsburgh City Council, Allegheny County District Attorney Stephen Zappala is warning members about possible repercussions of the gun control legislation before them.

He tells KDKA Radio's Lynne Hayes-Freeland city council could be committing a crime if legislation is passed.

“There’s some strong language in the series of statues that deal with firearms there’s a prevision that says it’s possible that this could be treated as a crime if you pass unconstitutional legislation knowing it’s unconstitutional,” said Zappala.

That means criminal complaints could be brought against members who vote for the package of three bills introduced last month. They seek to limit types of firearms and ammunition allowed in the city and allows temporary removal of guns from dangerous individuals.

Zappala adds he appreciates the effort but they need to contact state legislators.

“What they should be trying to do is lobby the votes in Harrisburg if that’s possible and just to the letter is that I’m not sure what the opinion from the law department was but I’m telling you unfortunately you don’t have the authority to do what you’re trying to do,” said Zappala.

I greatly appreciate you forwarding me the proposed legislation, referenced above. As the District Attorney of Allegheny County for the past 20 years, I understand the efforts to curtail gun violence and limit the accessibility to assault weapons, ammunition, and gun accessories capable of causing widespread injury, destruction, and death. I am also aware of the city's effort previously under Mayor Ravenstahl which was decided against the city in 2010. While I certainly see the desire for such type of legislation at the state and federal levels, I believe that City Council does not have the authority to pass such legislation.
In support of that opinion, I would refer you to 18 Pa.C.S. §6120; Ortiz v. Commonwealth of Pennsylvania, 681 A.2d 152 (Pa. 1996); Dillon v. City of Erie, 83 A. 3d 467 (Pa.Cmwlth. 2014); and Firearm Owners v. Lower Merion Township, 151 A.3d 1172 (Pa.Cmwlth. 2016). I am certain that you have sought the legal advice of your Law Department as to whether 18 Pa.C.S. §6119 would permit a criminal complaint to be filed against an individual member of Council who violates 18 Pa.C.S. §6120 by voting to adopt these types of regulations. Likewise, I am sure you have discussed the due process implications of enacting any legislation reviewed by your Law Department, and found to be unconstitutional. I am also certain that you realize that if such legislation passes, there is sure to be a resident of Allegheny County who seeks to file a private criminal complaint alleging a violation of §6120. Those are matters which will confront my Office, should the legislation be enacted. This letter is not intended to express any opinion on the merits or outcome of any effort to charge such violation against Council members. I do not have any knowledge of the legal opinion provided to you by your Law Department. I mention the matters just to ensure their consideration by you and Council.
As indicated, I understand the desire of local governments to be proactive in reducing gun violence and the opportunities to cause the type of pain, suffering, and death, which recently occurred in the City of Pittsburgh. I believe however, that the legislative effort needs to come from the General Assembly of the Commonwealth of Pennsylvania and that the legislation currently before Council, if passed, will be found unconstitutional.

A final vote by city council is expected in mid-February.