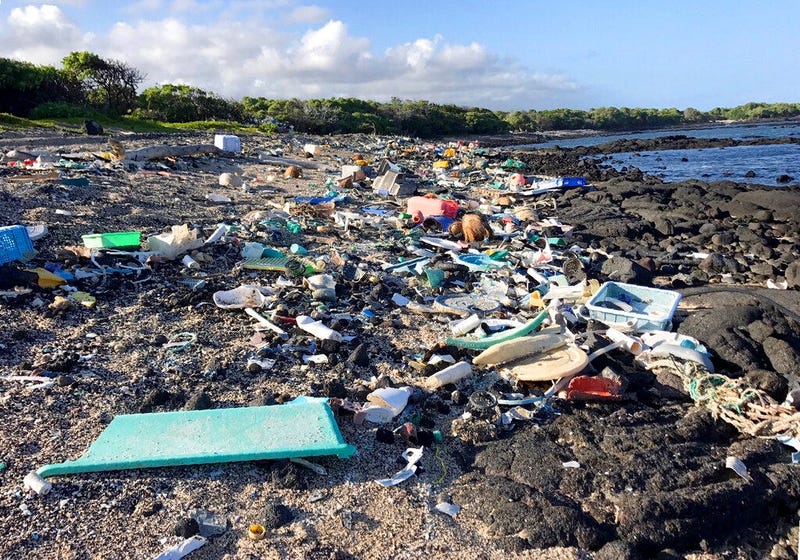 HONOLULU (AP) — The U.S. Environmental Protection Agency has designated the waters of two remote beaches in Hawaii as being contaminated by trash, forcing the state to address the persistent problem of plastic deposited on its coastlines by swirling Pacific Ocean currents.

The decision will require authorities to establish a daily limit for the trash at the two locations, one of which is so notorious for collecting debris that some call it “Plastic Beach” or “Junk Beach.”

Hawaii had opposed the step, which finds the waterways “impaired” under the Clean Water Act, on the grounds there were insufficient criteria or guidelines for determining what amounts to plastic pollution in waterways. But the EPA overruled the state, saying a lack of formalized methodology was not an excuse.

The agency published a notice about the decision on Friday. It’s seeking public comment through Aug. 19. The state Department of Health did not respond to a request for comment.

David Forman, director of the environmental law program at the University of Hawaii’s law school, said the state of Hawaii initially didn't want to list any water bodies as being impaired.

"So now, hopefully this will force Hawaii to to change that tune and start seriously addressing the problem of plastics in Hawaii,” he said.

It may also add “fuel to the fire” to a broader push to address plastics as a pollutant, he said. This could be at local levels, he said, like the state Legislature and city councils, and at global institutions like the International Union for the Conservation of Nature.

The environmental groups the Center for Biological Diversity, the Surfrider Foundation and Sustainable Coastlines Hawaii sued the EPA to compel the decision.

Daily limits on trash will have to be incorporated into the state’s water quality management plan, said Maxx Phillips, the Hawaii director for the Center for Biological Diversity. The state will need to control the amount of plastic pollution at these sites so it doesn’t harm water quality, she said.

Both sites are far from population centers. The first, Kamilo Beach, is on the southern point of the Big Island. The second, Tern Island, is an atoll 560 miles (900 kilometers) northwest of Honolulu that is within a wildlife refuge and marine national monument.

Trash lands at these spots in part because the Hawaiian archipelago acts like a comb for debris circulating in the Great Pacific Garbage Patch. The sites also may include trash originating in Hawaii.

Phillips said state and federal agencies should work together to “hold those responsible for this pollution accountable.”

“So that would be, you know, the oil industry, the fossil fuel industry,” she said.

Most plastics are made with chemicals from fossil fuels.

In support of its decision, the EPA cited a 2011 study showing plastics were widespread throughout sediment below the high-tide line at Kamilo Beach. The agency noted since 2003, the Hawaii Wildlife Fund has organized cleanups at the beach or nearby coastlines that have removed an average of 16 metric tonnes (18 tons) of trash per year. Plastic is a significant portion of the debris, it said.

Regarding Tern Island, the EPA said 14.5 metric tonnes (16 tons) of marine debris has been collected within 3 miles (4.8 kilometers) of the atoll over an 11-year period. It said 71 percent of the marine debris at Tern consists of plastics.

Called Kanemiloha‘i in Hawaiian, the atoll is a breeding site for 18 species of seabirds. Nearby small islands have hosted pupping Hawaiian monk seals, a critically endangered species, and nesting Hawaiian green sea turtles, a threatened species.

The EPA noted state of Hawaii ecosystem classifications say Tern’s waters should remain in their natural, pristine state as much as possible. Under Hawaii law, that means they should have “an absolute minimum of pollution” from any human source.

Environmental groups wanted the EPA to designate 17 other water bodies in Hawaii as impaired by trash under the Clean Water Act. But the agency found there were questions and uncertainty about the data for the studies used to analyze those sites.