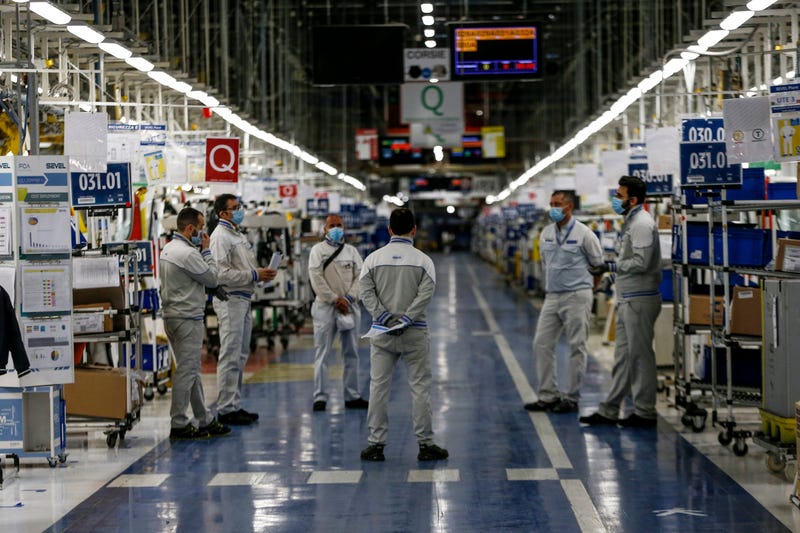 Photo credit FILE - Managers inform small groups of workers about new safety devices and measures taken at the Fiat Chrysler Automobiles plants of Atessa, in Central Italy, in a Monday, April 27, 2020 file photo. General Motors is asking a federal judge to reconsider dismissal of a lawsuit against Fiat Chrysler based on new allegations that FCA bribed union and GM officials with millions stashed in secret foreign bank accounts. The allegations were made in a court motion filed Monday, Aug. 3, 2020 by GM. (Cecilia Fabiano/LaPresse via AP, File)

DETROIT (AP) — General Motors is asking a federal judge to reconsider his dismissal of a lawsuit against Fiat Chrysler based on new allegations that FCA bribed union officials and GM employees with millions stashed in secret foreign bank accounts.

The allegations were made in a court motion filed Monday by GM, which wants to revive the lawsuit that was dismissed in July.

GM alleges that payments were made so the officials would saddle GM with more than $1 billion in additional labor costs.

GM's motion contends that payments were made to accounts in places like Switzerland, Luxembourg, Italy, Singapore and the Cayman Islands. The accounts were set up to avoid detection in a federal criminal probe of the union, according to the lawsuit. The accounts were discovered within the past 10 days by private investigators working on GM's behalf, according to court records.

The union said in a statement it’s not aware of allegations about foreign accounts, and it asked GM to share the information.

“If GM actually has substantive information supporting its allegations, we ask that they provide it to us so we can take all appropriate actions,” the statement said.

Fiat Chrysler called GM’s lawsuit meritless and said the judge in the case agreed. The company will continue to defend itself “and pursue all available remedies in response to GM’s attempts to resurrect this groundless lawsuit.”

Ashton, a former GM board member, is scheduled to be sentenced Aug. 18 in the federal corruption probe. Iacobelli is serving prison time. Williams' California home was raided by federal agents but he has not been charged. Gettelfinger has not been named in federal documents. Messages were left Monday seeking comment from Gettelfinger.

The accusation is the first against Gettelfinger in the wide-ranging UAW bribery and embezzlement scandal that so far has snared 10 union officials. Some spent thousands in union money for golf, lodging and fancy meals.

Gettelfinger, who was union president after Fiat took over Chrysler in 2009, helped to make sure Holiefield and Williams kept their union leadership posts “in order to preserve and progress the conspiracy to harm GM," the documents said. GM alleged that accounts “apparently exist” in Gettelfinger's name, and the name of a relative in Panama and Switzerland.

“This previously hidden network of accounts, utilized by defendants and controlled in part by individuals purportedly acting on GM’s behalf, reveals a magnitude of bribery and illegal activity specifically targeting GM that was not previously known or reasonably knowable," the documents stated.

A message was left seeking comment from the U.S. Attorney's Office in Detroit, which has been leading the federal probe.

In July, U.S. District Judge Paul Borman in Detroit tossed out GM’s lawsuit that alleged that Fiat Chrysler paid off union leaders to get better contract terms than GM.

He wrote that GM’s alleged injuries were not caused by FCA violating federal racketeering laws, that GM had not stated a claim that can be granted, and that the people harmed by the bribery scheme were Fiat Chrysler workers.

In a 2019 lawsuit, GM alleged that Fiat Chrysler bribed officials of the United Auto Workers union to get lower labor costs. GM alleged that FCA CEO Sergio Marchionne, who died in 2018, wanted to pressure GM into merging by weakening it with higher costs.

GM says in its new motion that Borman should alter or amend his order allowing GM to amend its complaint to present the new allegations.

In a declarations filed with the court Monday, lawyers with the Kirkland & Ellis law firm, which represents GM, wrote that third-party investigators recently came up with evidence of the overseas bank accounts. The evidence was not available when GM filed its original complaint, they wrote.

“Certain of these third parties, all of whom have significant credentials supporting their investigative expertise, recently discovered reliable information indicating the existence of foreign accounts potentially connected to the scheme alleged in GM’s complaint,” one declaration said. "Only within the last 10 days did we obtain sufficiently reliable information concerning the existence of foreign bank accounts by various individuals previously and currently employed by FCA and former UAW Presidents and officers.”

GM says in its new motion that Borman should alter or amend his order allowing GM to amend its complaint to present the new allegations.