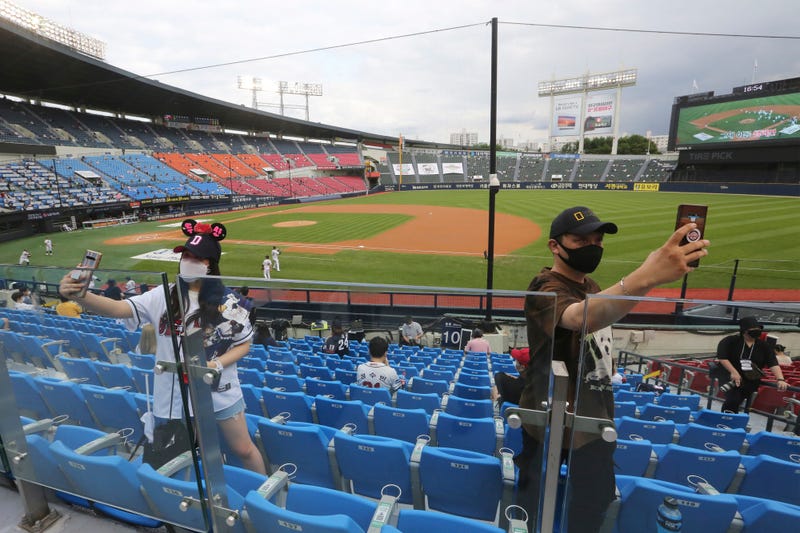 Photo credit FILE - In this July 27, 2020, file photo, fans wearing face masks to help protect against the spread of the new coronavirus take a selfie before the KBO league game between Doosan Bears and LG Twins in Seoul. South Korea may have been way ahead of the international curve in getting sport back to some semblance of normality but instead of near-full stadiums watching the end of baseball and soccer seasons later this year, a recent spike in coronavirus cases means officials will settle for just finishing the season at all.(AP Photo/Ahn Young-joon, File)

BEIJING — China on Sunday reported 12 new confirmed coronavirus cases and no additional deaths. The National Health Commission said 422 patients were being treated, including 16 in critical condition. The death toll in China, where the outbreak began in December, stands at 4,634.

SEOUL, South Korea — South Korea has added 397 new coronavirus cases, counting its tenth straight day of triple-digit increases as the speed of viral spread nears the levels the country saw during the worst of its outbreak in spring.

The resurgence, which began in the densely populated capital area before spreading to practically every major city and provincial town over the past week, is a major setback for the country that had been eager to tout its hard-won gains against the virus.

After avoiding stringent social distancing measures because of concerns over a fragile economy, officials have now banned large gatherings, closed nightspots, beaches and churches and removed fans from professional sports in a desperate effort to stem transmissions.

Sunday’s daily jump in infections marked the third-consecutive day of over 300 and the highest since the 483 cases reported on March 7, when the country was dealing with a spike of transmissions in its southeastern region.

The KCDC linked 297 of the new cases to the Seoul metropolitan area, home to half of the country’s 51 million population, where health workers have struggled to track infections tied to various sources, including churches, schools, restaurants and workplaces.

Cases were also reported in other major cities such as Busan. Gwangju, Daejeon and Daegu, the epicenter of the country’s previous major outbreak in late February and March.

— How does coronavirus spread at a concert? Germans do a test of negative volunteers, collecting data in a “real life” simulation of a pop concert with strict health and safety controls.

— Their final breaths are tormented. Miami ICU nurse Rublas Ruiz has seen too many of them, the last gasps of 17 men and women who died of the coronavirus.

— Fifteen Minnesota residents have contracted the coronavirus after being exposed during the 10-day Sturgis Motorcycle Rally in South Dakota. Minnesota health officials expect the number to grow.

TUSCALOOSA, Ala. — The University of Alabama has issued a temporary prohibition on student events, including off-campus parties and fraternity and sorority gatherings.

The university says its issuing a 14-day moratorium on all in-person student events outside of classroom instruction. Social gatherings are prohibited both on and off campus and the common areas of dormitories and fraternity and sorority houses are closed, according to the new guidelines.

The announcement came less than a week after city and school officials raised the alarm about large crowds waiting outside bars.

Alabama has confirmed nearly 2,000 deaths in the state, according to a tally by Johns Hopkins University.

BOSTON — More cases of coronavirus have been traced to a recent wedding reception in Maine. Health officials say 53 cases have been linked to the Aug. 7 reception in Millinocket. A hospital says one person associated with the outbreak has died.

The reception at the Big Moose Inn exceeded the state’s indoor gathering limit, among other violations of state rules. About 65 people attended the event. The limit was 50.

Thirty-two new cases and one additional death was announced Saturday by the Maine Center for Disease Control and Prevention. Maine has reached nearly 4,320 cases and 131 deaths.

The Wisconsin State Journal reports that Helbachs Coffee Roasters and Kitchen will close on Aug. 31. The shop says in an Instagram post Thursday its landlord has refused to renew its lease and the decision to close comes on the heels of “enforcement action, negative public statements and continued vindictive and hostile behavior” by county health officials toward the shop.

Public Health Madison and Dane County issued the shop three citations for violating the order. The shop was facing revocation of its food and drink license because of its refusal to abide by the order.

The shop responded with a lawsuit, declaring itself “a mask-free zone.”

The state is registering an average of 156 coronavirus deaths per day this month, which likely makes COVID-19 the state’s No. 1 killer during that period. Cancer and heart disease each average about 125 deaths per day, according to the Florida Department of Health.

The number of new cases continues a downward trend from more than 10,000 cases per day a month ago. During the past week, the state’s positivity rate on tests has been 10.8%.

Hospitalizations due to COVID-19 have been declining. On Saturday, 4,773 patients were treated for the disease in Florida hospitals compared to Friday’s 4,909 and Thursday’s 5,340. That number has fallen from a peak above 9,500 on July 23.

That increased the state’s totals to 197,895 cases and 4,756 deaths, as reports of infections and deaths continued to slow.

The coronavirus hospitalization numbers from the health department showed a downward trend, posting levels from late May and early June before Arizona became a national hot spot. New case and death reports have dropped since mid-July.

ROME — Vacationers returning to the Italian mainland from Sardinia helped push Italy’s daily new coronavirus caseload far past 1,000 on Saturday, reaching the high for the first time since early May.

Confirmed cases increased from 947 on Friday to 1,071 on Saturday, with many infections confirmed in travelers who were tested as they disembarked from airplanes or ferries.

Authorities in Lazio, the south-central region including Rome, say 45 percent of its 215 new cases Saturday were from people returning from Sardinia, where several clusters have been linked to discos or private parties on the posh Emerald Coast resort area.

While the average age of infection early in the outbreak hovered near 70, it’s now 30.

That’s according to a tally kept by Johns Hopkins University. Governments have been attempting to balance public health with economic health.

Officials believe the true numbers are far higher because of a lack of testing and reporting. In the U.S., the nation with the most infections, health officials believe there may be 10 times more cases than the confirmed 5.6 million. The U.S. also leads the world in deaths, with more than 175,000.

The news comes as South Korea, once considered a coronavirus success story, banned large gatherings, shut nightspots and churches and banned fans from professional sports to slow a viral resurgence. Germany, which also initially slowed the virus, reported a four-month high of more than 2,000 cases on Saturday. Schools there reopened two weeks ago, and at least 41 schools this week reported students or teachers were infected.

In the U.S., schools have begun to reopen, with coronavirus outbreaks triggering sudden closings, quarantines and anxiety among parents.

BERLIN — Germany’s disease control reported 2,034 new cases of coronavirus on Saturday, the first time the daily national increase has topped 2,000 since the end of April.

The Robert Koch Institute calls the coronavirus outbreaks “very concerning.” They are reported in various settings, including nursing homes and hospitals, schools, and “especially among travelers and in the context of religious or family events.”

Germany’s 16 states are resuming in-class schooling. There are concerns about the risks of virus clusters at schools spreading to families and others. In Berlin, at least 41 schools this week reported students or teachers had become infected.

The country was widely applauded for its quick and efficient effort to initially slow the spread of the pandemic, which peaked at more than 6,000 daily cases near the end of March and early April. But the figures have been increasing in recent weeks.

BREMERTON, Wash. — Washington state health officials say more than 30 coronavirus cases have been reported in an outbreak at a Bremerton hospital.

The Washington State Department of Health says the outbreak has affected multiple units at St. Michael Medical Center, which is part of the CHI Franciscan system. Officials say the outbreak involves hospital staff and employees.

The Kitsap Public Health District and state health officials say they are working with the hospital to contain the outbreak after the first case was reported late last week. Officials say patients discharged from the impacted units have been notified and new admissions and visitation at the hospital is currently limited.

NEW YORK — New York state will apply for a federal program for unemployment money now that the state won’t have to add funds.

President Donald Trump had signed an executive order this month making money available from a FEMA fund after a new pandemic relief bill wasn’t reached. The $400-per-week benefit put the onus on the states to pay $100 a week of that amount.

New York Gov. Andrew Cuomo called the idea “laughable” because state budgets are cash-strapped from the coronavirus. The U.S. Department of Labor issued guidance last week saying states would not have to contribute.

New York budget director Robert Mujica says, “the federal government has blinked and will no longer make states provide funding they do not have.”

PRAGUE — The Czech Republic has recorded its biggest single-day increase in coronavirus cases.

The Health Ministry says there were 506 new cases in the latest 24-hour period. The previous high was 377 cases registered on March 27.

NEW DELHI — India recorded nearly 70,000 new coronavirus infections as the disease spreads across the country’s southern states after plateauing in the capital and the financial center of Mumbai.

India’s Health Ministry reported 69,878 new cases on Saturday, bringing the total to 2,975,701. Globally India has been reporting the biggest daily rise in cases for 18 consecutive days.

Some 2.2 million people have recovered from the disease in India since the first case was diagnosed in late January.

India has the third-highest caseload behind the United States and Brazil. Its 55,794 deaths is the fourth-highest death toll in the world.

WASHINGTON — Democratic presidential nominee Joe Biden says he would do whatever was needed to keep the country safe amid the coronavirus pandemic even if that meant shutting down the country.

Biden made the comment in an interview with ABC. The interview airs Sunday night, but clips were provided Friday.

Biden says, “I will be prepared to do whatever it takes to save lives because we cannot get the country moving until we control the virus.” He adds that if scientists recommended shutting down the country, “I would shut it down.”

President Donald Trump is encouraging schools to reopen and people to get back to work. The U.S. has had more than 5.5 million confirmed coronavirus cases, with more than 175,000 deaths.