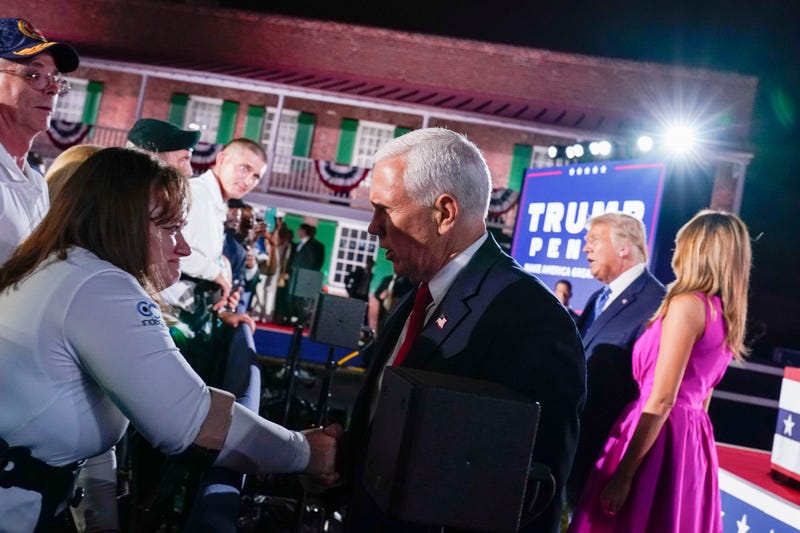 WASHINGTON (AP) — It was a scene from a bygone era: Vice President Mike Pence shaking hands with and fist-bumping audience members who had rushed forward, standing shoulder to shoulder, to greet him and the president after Pence's speech at the Republican National Convention.

No one appeared concerned about social distancing. Few wore masks. Some told reporters they had not been tested for the coronavirus before Wednesday night’s gathering at Fort McHenry in Baltimore

A more striking scene could unfold Thursday night, when more than 1,000 people were expected to assemble on the South Lawn of the White House for President Donald Trump's renomination acceptance speech. That's an eye-popping crowd in a global pandemic that has forced the cancellation of large gatherings, from sports events and concerts to weddings and funerals.

As Trump has tried to push past a virus that has tanked the economy and threatened his reelection, GOP organizers have worked to stage a convention that puts the pandemic in the rear view mirror and highlights the nation's progress, even as it continues to kill. More than 42,000 new cases were reported on Wednesday alone and 2,700 more have died since the week began.

Few convention speakers have made reference to the virus; others have discussed it in the past tense.

“It was awful. Health and economic impacts were tragic," said White House economic adviser Larry Kudlow on the convention's second night. “But presidential leadership came swiftly and effectively with an extraordinary rescue for health and safety to successfully fight the COVID virus."

The display stands in jarring contrast with the Democrats, who dispensed with audiences at live speeches during their virtual convention last week. Presidential nominee Joe Biden and running mate Kamala Harris also wore masks, even when they were outside and standing apart from one another.

“Is coronavirus gone? Is COVID-19 gone?” Biden campaign senior adviser Symone Sanders asked Thursday on a call with reporters. “I didn’t see any masks or social distancing happening during the vice president’s speech last night. So, the reality is, there is a lack of leadership here.”

To be sure, the Republicans' event looked very different from past conventions. Because of the virus, the GOP canceled what would have been mass gatherings drawing thousands to North Carolina or Florida, and they have been consulting with a coronavirus adviser. Indoor speeches were delivered without audiences. But outdoor events have featured guests.

That included a Rose Garden address Tuesday by first lady Melania Trump, who spoke about the toll of the virus, and Pence's speech Wednesday, delivered in front of about 100 people, including Pence's family and wounded veterans.

Chairs were positioned at Fort McHenry with some space between them, but many in the crowd rushed to the front at the end to greet Pence, Trump and their wives. While the president and first lady appeared to keep their distance, Pence was seen shaking hands, exchanging fist bumps, and at one point accepting a small gift from an audience member. Few in the crowd were seen wearing masks.

“It is the height of hypocrisy for this self-proclaimed law and order president and vice president to flout my lawful Executive Order, dated August 7, 2020, intended to keep our residents safe during what continues to be a raging pandemic that they have politicized and failed to control,” he said in a statement.

The White House and campaign refused to say how many in attendance had been tested Wednesday or would be Thursday. White House spokesman Judd Deere said only that "those in close proximity to the president and vice president are tested.”

Thursday's keynote could be even more jarring. Guidance sent to invited guests for Thursday's event from the Republican National Committee makes clear that masks will not be required on the South Lawn, but are required upon arrival and in security screening areas and encouraged in “high traffic areas including restrooms and hospitality spaces.”

Guests have also been asked to “practice social distancing whenever possible” and stay home if they're displaying coronavirus symptoms, have recently tested positive for the virus or have been in recent close contact with someone who has.

Robert G. Darling, who served a physician to former President Bill Clinton and is the chief medical officer of the Patronus Medical Corp., said the group has been working with the RNC on the convention “to make certain proper protocols are in place to ensure the safety and well-being of individuals at convention venues.” He said those protocols are in line with city and federal guidelines and that health professionals have been on-site “to make certain screening has been done on a consistent basis to ensure the convention meets the highest standards of public safety.”

But the refusal to abide by other widely accepted mitigation recommendations — including those promoted by the president's own heath agencies — confounded public health experts watching at home.

“The president and the entire RNC, they had an opportunity to show the seriousness of this pandemic, which is the worst public health crisis in our lifetimes, and it's extremely concerning that only did they not discuss precautions like wearing masks and social distancing, they are going against all of our public health guidance," said Dr. Leana Wen, an emergency physician and visiting professor of health policy at The George Washington University and the former health commissioner of Baltimore.

Wen noted that mass gatherings pose the highest risk for transmitting the disease, and expressed concern both that Baltimore could see an increase in cases and that the display might lead viewers to believe that, they, too, can gather in groups and not wear masks.

Robert Blendon, a professor of health policy and political analysis at Harvard University, said the event was focused on a different goal: bolstering Trump's reelection chances.

“The president and the vice president are very aware that if people are going back to work and their kids are actually in school and they feel somewhat safe, the incumbent will have an advantage in the election,” he said. “They're trying to do things to say that the risk of COVID is much less than public health and other people are saying.”

Associated Press writers Jonathan Lemire, Zeke Miller and Will Weissert in Washington and Brian Witte in Annapolis contributed to this report.