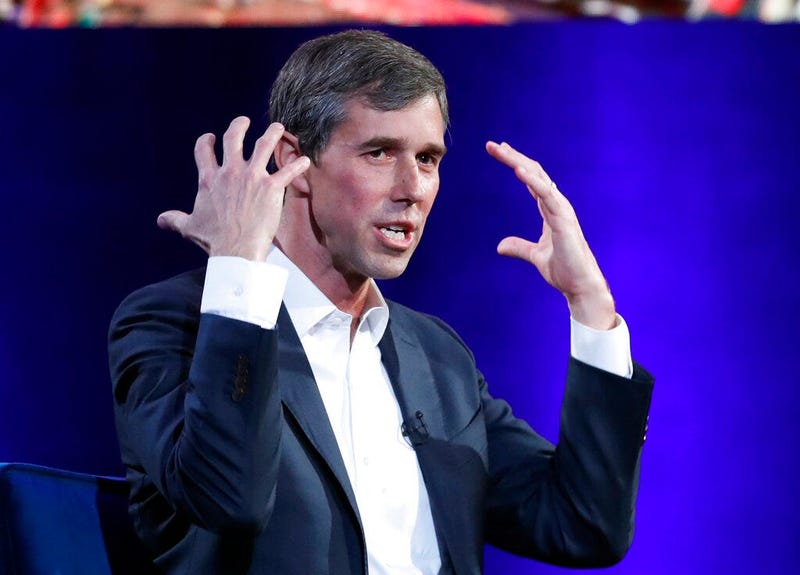 By WILL WEISSERT Associated Press

AUSTIN, Texas (AP) — Former Texas Rep. Beto O'Rourke announced Thursday that he'll seek the 2020 Democratic presidential nomination, pledging to win over voters from both major parties as he tries to translate his political celebrity into a formidable White House bid.

Until he challenged Republican Sen. Ted Cruz last year, O'Rourke was little known outside his hometown of El Paso. But the Spanish-speaking 46-year-old former punk rocker became a sensation during a campaign that used grassroots organizing and social media savvy to mobilize young voters and minorities. He got within 3 percentage points of upsetting Cruz in the nation's largest red state — and shattered fundraising records in the process — immediately fueling chatter that he could have higher ambitions.

Weeks of teasing an announcement are behind him, but O'Rourke now must prove whether the energy he brought to the Texas campaign will resonate on a much larger stage. For all the buzz associated with his candidacy, the former three-term congressman hasn't demonstrated much skill in domestic or foreign policy. And, as a white man, he's entering a field that has been celebrated for its diverse roster of women and people of color.

"This is going to be a positive campaign that seeks to bring out the very best from every single one of us, that seeks to unite a very divided country," O'Rourke said in a video announcement with his wife on a couch. "We saw the power of this in Texas."

O'Rourke had never before visited Iowa, which kicks off presidential voting, but said during his first stop at a coffeeshop there Thursday, "I could care less about your party persuasion, your religion, anything other than the fact that, right now, we are all Americans."

His comments were carried live on several cable networks, the kind of exposure other candidates in the already crowded 2020 Democratic field don't often get.

O'Rourke has promised to travel the country listening to voters, then will return to El Paso, on the border with Ciudad Juarez, Mexico, on March 30 for an official campaign kickoff. He invites would-be supporters "to the greatest grassroots campaign this country has ever seen."

O'Rourke joins a large and unsettled 2020 field in which his fundraising prowess, bipartisan optimism, southwestern Texas charm and anti-establishment attitude could quickly make him a political force. His lack of governing experience could hurt, but President Donald Trump's rise suggests that the U.S. electorate might welcome a charismatic outsider.

The sports and entertainment world already had its eye on O'Rourke during the Senate campaign: NBA star LeBron James wore an O'Rourke hat after video of the Texan defending NFL players' right to protest during the national anthem went viral. Beyonce, a Houston native, endorsed O'Rourke.

And he was the only presidential prospect interviewed in February by Oprah Winfrey, who appeared genuinely excited about the prospect of an O'Rourke White House run.

Should he parlay a 2018 Senate defeat into a successful 2020 White House campaign, O'Rourke would be the first U.S. politician to do so since Abraham Lincoln lost his Senate bid to Stephen Douglas in Illinois in 1858, then was elected president two years later.

Democrats have long dreamed that a booming Hispanic population and droves of Americans moving to Texas from elsewhere could turn the nation's largest red state blue and transform the Electoral College by making the Republican path to the presidency all but impossible. It remains to be seen, though, whether O'Rourke's home-state appeal could truly make Texas competitive. Another Texas Democrat, former Obama administration housing chief Julian Castro, was already running.

Trump has repeatedly blasted the idea of an O'Rourke presidential try, calling him a "flake" and a "total lightweight" and joking, "I thought you were supposed to win before you run for president."

O'Rourke visited all 254 of Texas' counties while running for Senate and often drew larger-than-expected crowds, including in conservative areas that Democrats gave up on decades ago. It's a strategy that could serve him well in Iowa, where Cruz campaigned in all 99 counties before winning its caucus during the 2016 GOP presidential primary.

O'Rourke has three full days of political events planned there.

The Texan's advisers have reached out to early-state Democratic officials seeking advice for potential hires and strategy. And, in New Hampshire, home to the nation's first primary, an O'Rourke adviser asked for guidance on how they might schedule a driving tour through the state should he arrive coming from the West — indicating that a cross-country trip of sorts might be part of a campaign rollout plan.

Although he isn't among the first wave of Democrats to jump into the race, O'Rourke enters with strong national name recognition. Democratic operatives in states with early presidential primaries, including South Carolina and Nevada, have formed Draft Beto groups that spent months fundraising, lining up potential O'Rourke endorsements and building campaign infrastructure until their candidate was ready.

O'Rourke refused donations from outside political groups and shunned pollsters during his Senate campaign though he's not completely sworn off polling for a presidential run. He nonetheless harnessed growing nationwide popularity to rake in $80-plus million during the Senate bid, including a staggering $38 million from July to September 2018 alone.

While challenging Cruz, O'Rourke insisted that he had no interest in running for president, vowing to quietly return to El Paso should he lose. But during his election night concession speech, he let rip the kind of casual swearing that freckled an unorthodox campaign, declaring to supporters on national television: "All of you, showing the country how you do this, I'm so f---ing proud of you guys," before promising, "We'll see you down the road."

O'Rourke has shrugged off such complaints, saying he doesn't know if he's liberal enough to be called a "progressive" and doesn't much care for party labels.